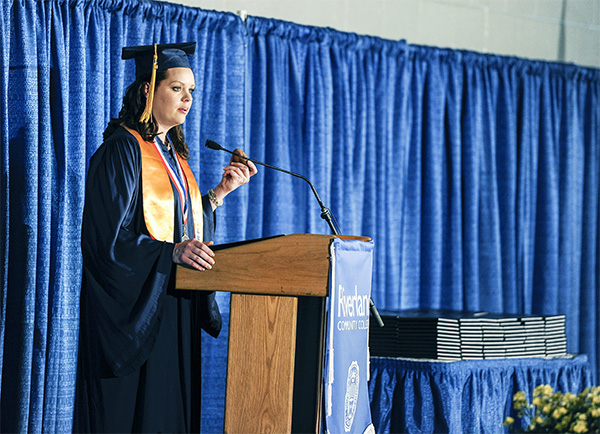 For Jennifer Prins, 31, graduating from Riverland Community College was one step closer to getting a job she wanted, even if it took five years.

“One class at a time,” she laughed. 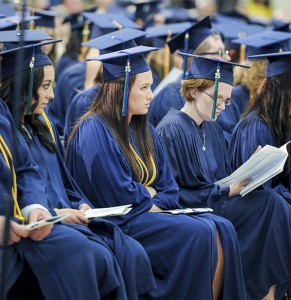 She graduated with an LPN degree and has already lined up a job in an Owatonna clinic in family medicine.

“I worked in assembly for 10 years and I wanted to do something that I made a difference in,” Prins said.

This is the case with many students — returning to get a degree that will help them reach their career goals. About 62 percent of the students received an associate degree, while 38 percent earned degrees, certificates and diplomas from various Riverland career programs.

Riverland President Adenuga Atewologun welcomed the students and congratulated them on their success.

“I am delighted to be here for this occasion,” he said during his speech. “And I am glad that each of you — family, friends, faculty, and especially our newest graduates — are here to celebrate and honor the successful completion of each graduate’s hard work, dedication and effort.”

For some students, this is only the first step in the process. Aliza Mainard, 20, graduated with her Associate of Arts Degree, but she will return to Riverland’s Austin campus and take online classes in the fall to continue working toward her major in accounting. Yet the graduation ceremony held a special place in her family.

“I’m the first Mainard to graduate from college for anything, so that’s why I’m doing this,” she said. 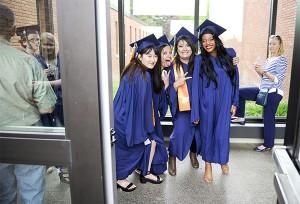 Riverland gradutes stop and pose for a quick photo through an open door on the way to sitting down for Riverland’s commencement Friday afternoon at Riverland Community College. — Eric Johnson/Albert Lea Tribune

Though Mainard, from Blooming Prairie, went through struggles during her time in school — such as being robbed at gunpoint and having a bad accident that left her in the hospital for an extended period — she didn’t give up, and the Riverland staff didn’t give up on her.

“The teachers are really understanding about things like that,” she said. “Education is a very important part in life so it’s important to get that, no matter how long or difficult it is.”

Mainard encouraged new students to look into classes at Riverland.

“I love it here,” she said. “The teachers are friendly, they teach in many different ways. If you learn a certain type of way, they will help you with that.”

For Heather Fast, 33, graduating Riverland was step two out of four. Fast, one of two commencement speakers, said her college experience didn’t start out the way she planned.

“I entered classes as a single mother of four children, having left a 10-year marriage with literally the clothes on my back,” she said during her speech.

“I was the embodiment of a puddle of mud,” she continued. “But determined to succeed and prove to my children that success is available to anyone who tries.”

Fast was born in a small Mennonite town west of Mankato. She graduated Friday with an Associate in Science Degree in nursing and plans to continue towards a bachelors degree this fall at Winona State University. She won awards and scholarships during her time in Riverland, was an active volunteer and has spoken with audiences across the region about the ethics surrounding genetic manipulation of the human genome and stress reduction. She plans to get accepted into medical school and become a cardiovascular surgeon. But on Friday, she was just a woman in a cap and gown getting ready to take the next step toward her dreams. 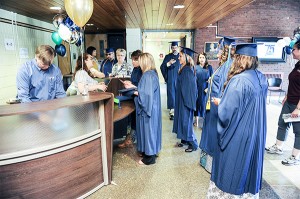 “It’s exciting yet intimidating,” she said about graduating. “Because this isn’t the end of the road for myself, so I’m excited that one step is done, and on to step three and four.”

She encouraged the other graduates to continue taking opportunities to help them reach their goals.

“I have taken advantage of resources and opportunities available, to grow as an individual, a student and a leader, making the cuts necessary to change into the rough gem I am today,” she said to her fellow graduates. “Just like all of you, I will continue to take opportunities and lessons learned while attending Riverland to some day become a rare jewel.”

—Of those graduating, 474 students (92 percent) have taken at least one course online.

—18 students are post-secondary-enrollment-option students graduating from both Riverland Community College and their respective high schools in the region.