Robert “Bob” J. Farris, 72, of rural Clear Lake died Wednesday, May 27, 2015, at his home. Visitation will be from 4:30 to 7 p.m. today at the Cataldo Funeral Chapel, 160 East 4th St. in Garner, with the casket open from 4:30 to 5 p.m. Following the visitation, the Rev. Ed Bard, chaplain at Hospice of North Iowa, will officiate a service. Garner Veterans Ceremonial Unit will conduct military rites. Cremation will follow the service with inurnment at a later date. Cataldo Funeral Home in Garner is in charge of arrangements. 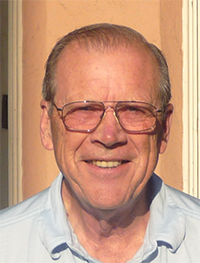 Robert James Farris, the son of Adolphus and Verdella (Meister) Farris, was born March 10, 1943, in Albert Lea. He graduated from Glenville High School in 1961. He received scholarship offers to play football at the collegiate level, but opted instead to enter the workforce. For a few years he painted water towers, drove harvesters and worked at a meatpacking plant.

With the war in Vietnam escalating, Bob was drafted into the United States Army. He considered himself lucky to be assigned to South Korea peacekeeping operations. Following his honorable discharge, he returned to Minnesota. Reconsidering his stance on higher education, he earned an associate’s degree in electrical engineering and embarked on a career in computers and networking. In the 1980s he was the engineer in charge of the mainframes — computers the size of football fields — at the Dearborn, Michigan, world headquarters of the Ford Motor Company.

On Dec. 30, 1970, Bob married Lorraine Amundsen of Minneapolis. They lived in Texas and Minnesota before settling in Michigan, where they raised their three children. Lorraine passed away in 1990. Bob never remarried.

In 2003, Bob moved north of Ventura and became a truck driver at T.S. Trucking in Northwood. He adopted an Australian shepherd from an animal shelter in Los Angeles, named her Bailey and they became each other’s constant companion. He enjoyed his Harley Davidson, working in the yard, golfing and visiting with friends and family. Most of all, he enjoyed being a grandfather.

He was preceded in death by his wife, Lorraine, in 1990; parents; sisters Beverly Brabec and Darlene Farris; sister-in-law, Dottie Farris; and brother-in-law, Elvin Lambert.