Funeral services for Russell A. Anderson will be at 10:30 a.m. Saturday at St. Paul Lutheran Church in Conger. The Rev. Daphne Hamborg will officiate. Visitation will be from 5 to 7 p.m. today at the Bonnerup Funeral Home chapel in Albert Lea, and again one hour prior to the service at the church. Interment will take place at Conger Cemetery. 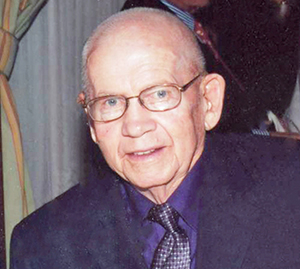 Russell passed away surrounded by family on Thursday, May 14, 2015, at Thorne Crest Retirement Community.  He was 92.

Russell Abraham Anderson was born on Dec. 23, 1922, to Abraham and Alma (Ramsey) Anderson in Albert Lea. Russell attended school through the seventh grade and helped out on the farm following his schooling. Russell was united in marriage to Lavon (Wulff) on Sept. 30, 1945, at United Methodist Church in Albert Lea. To this union three children were born, Donald, Marion and Marvin.

Russell was a farmer, starting at a young age and continued until 1965. At that point, he switched careers and became a mechanic at Clarks Grove Hardware and Implement until his retirement in 1988. Russell enjoyed helping others. He was a volunteer fireman for Conger Fire Department, was on the Conger City Council and was on the church council at St. Paul Lutheran Church in Conger where he was a faithful member. He and his wife had also volunteered their time by visiting shut-ins around the area where they would bring goodies and enjoy conversation. He also liked to bowl, fish and play cards. Russell loved time spent with his family and enjoyed every occasion where the entire family was together.

Russell is survived by his children Don (Judy) Anderson of Clarks Grove, Marion Behr of Indianapolis and Marvin Anderson (Kevin Mackenthun) of Minnetonka; grandchildren Patrick Anderson of Minneapolis, Timothy (Dana) Anderson and their son, Elliot, of Andover and Kelly (Chris) Bowman and son, Carter, of Coon Rapids; and a sister, Phyllis Donahue, of St. Ansgar, Iowa.

He is preceded in death by his parents; wife, Lavon; two brothers-in-law; and one sister-in-law.