Memorial services for Ruth “Ruthie” Ann Haskins of Albert Lea will be at 1 p.m. Tuesday at St. Theodore Catholic Church in Albert Lea. The Rev. Timothy T. Reker and Deacon Mike Ellis will officiate. Interment will be at a later date in Graceland Cemetery. Friends may visit with family one hour before services at the church. 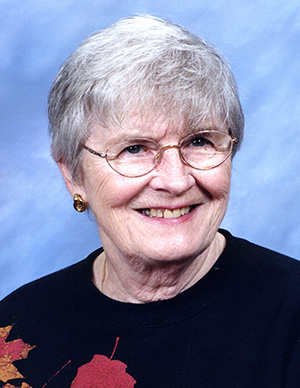 She was born on Feb. 20, 1934, in Waseca, the daughter of Edward and Marion (Flannery) Giel. She graduated from Winona Senior High School and attended Winona State Teachers College.

On Feb. 27, 1954, she was united in marriage to Robert Duane Haskins in Winona. Following their marriage, Bob “Sonny” and Ruthie lived in Winona and Hayfield before making their home in Albert Lea in 1963. Ruthie had worked in the produce department at Red Owl for many years and then as a medical secretary for a short time, but she loved and cherished her role as wife, mom, grandma and homemaker.

Ruthie was preceded in death by her parents; her granddaughter, Kassi Marie Haskins;  daughter-in-law, Nancy (Christian) Haskins; and brothers Alden and Paul Giel.

One of her grandchildren stated, “Today the sun set on the life of Ruth Haskins. She was the person who taught me the power of love and laughter. She was a seasoned guide on my path to well-being, and I loved her beyond measure. The world is dimmer without you in it, Grandma.”