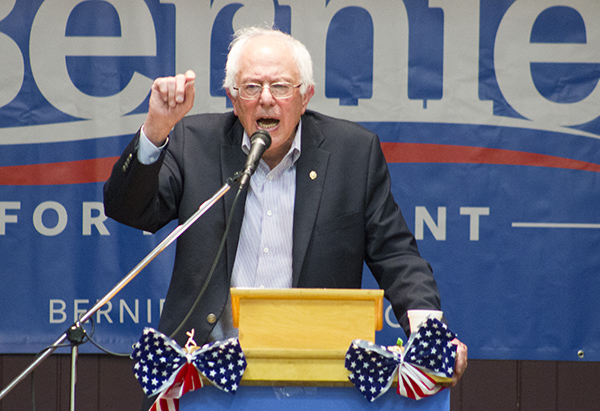 Democratic presidential candidate Bernie Sanders encouraged a crowd of more than 200 people on Saturday to stand up and say, “Enough is enough.”

Speaking in a town hall forum at the Kensett Community Center, Sanders talked about changes he would like to see in areas such as tax equality, wages, the environment and infrastructure.

“The American people, the people of Iowa, are hungry for something different,” Sanders said.

The Kensett visit came as Sanders picks up the pace of his presidential campaign tour. He made visits earlier in the week in New Hampshire and earlier in the day in Iowa City, Iowa, and Ames, Iowa. He announced his bid for office in Burlington, Vermont, on May 26. He said over 5,000 people came out for his campaign announcement.

Sanders said at the top of the list for his campaign is addressing income and wealth inequality. He said the United States is the wealthiest nation in the history of the world, but most of that wealth rests in the hands of a few.

Millions of people are working longer hours for lower wages, and he said the median income today is actually almost 5,000 less than in 1999. At the same time there are people only working part time who want to work full time.

“This is not the American economy we will tolerate,” he said.

He said he would support a jobs program at the federal level that would help create jobs and he supports raising the minimum wage.

“Time is long overdue to raise minimum wage to a living wage,” Sanders said, noting the importance of pay equity for women workers.

He said the country’s leaders need to demand that the wealthiest pay their fair share of taxes and said he thinks the government should guarantee health care to all as a right and what he would support free college tuition.

He spoke of a person who had just graduated from dental school with more than $400,000 in debt.

Regarding the environment, he said he acknowledges that climate change is real and that it is caused by human activity. The country needs to move away from so much dependence on fossil fuels and move toward other sources such as wind and solar energy.

Sanders said he recognized that one person cannot bring about all of these changes on his or her own, he said the true change will come by people standing up and getting involved, demanding changes.

After his speech, Sanders opened the meeting up to questions from the audience.

Brian Anderson of Albert Lea, who sat in the front row during the event, asked a question about the stigma that comes along with the term of socialism.

He said he has listened to Sanders, a self-identified Democratic Socialist, for several years on “Brunch with Bernie” and he likes the fact that Sanders declares himself an Independent.

“If people get past the word of socialism, I don’t think there’s many things about him people wouldn’t agree with,” Anderson said.

They are getting out and meeting with the candidates, and two weeks ago attended the house party with Democratic presidential candidate Hillary Clinton.

“I like what Hillary said, but Bernie was more dynamic and more outspoken,” Steven Juhl said. “Bernie addressed a lot more of the issues.”

As a veteran, he said he is concerned with funding to veterans and making sure they are not denied the benefits they have earned.

Other issues raised during the question-and-answer period included thoughts about making sure foods are labeled with their ingredients, how to stimulate a greener economy and what Sanders would support for farmers, among others.

He said Sanders came to Kensett at the invitation of Democratic activist Jim Berge of Kensett.

Sanders reportedly read a favorable comment in a Washington, D.C., newspaper that quoted Berge. The next day, one of the senator’s staff members called Berge to thank him for his remarks, and Berge ultimately invited him to visit the next time he was in Iowa.

This was the first time a presidential candidate has stopped to speak in the rural community. 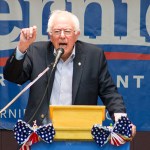 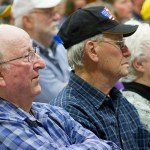 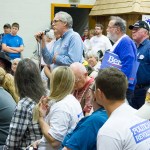 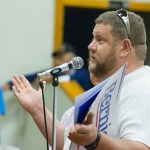 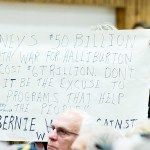 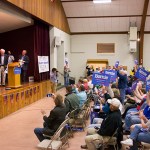