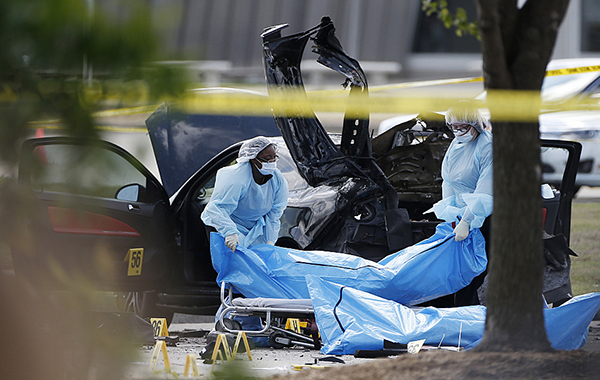 Personnel remove the bodies of two gunmen Monday in Garland, Texas. Police shot and killed the men after they opened fire on a security officer outside the suburban Dallas venue, which was hosting provocative contest for Prophet Muhammad cartoons Sunday night, authorities said. Brandon Wade/AP

By Mukhtar Ibrahim and Laura Yuen

Days before it happened, an al-Shabab militant from Minneapolis called for an attack against the Texas contest whose participants drew cartoons depicting the Prophet Muhammad.

Two gunmen opened fire outside the event on Sunday. The cartoon contest, billed as a free-speech event but sponsored by an organization that is seen as an anti-Muslim hate group, had hired numerous security guards. The attackers were killed, and one guard was wounded.

In posts on social media, the al-Shabab militant, Mohamed Abdullahi Hassan, called on his “brothers” to carry out attacks similar to those in France earlier this year. There, gunmen killed 12 people, including several staff members of the satirical magazine Charlie Hebdo, which had included Muhammad among the subjects of its cartoons.

“The brothers from the Charlie hebdo attack did their part,” Hassan tweeted April 23, 10 days before the Texas attack. “It’s time for brothers in the #US to do their part.” He included a link to the Texas event.

Hassan, known as Mujahid Miski on social media, also tweeted photos of Minneapolis men Shirwa Ahmed, the first known U.S. citizen suicide bomber, and Farah Beledi, another al-Shabab fighter who was shot trying to carry out a suicide attack in Mogadishu, Somalia, in 2011. He also posted a photo of Amedy Coulibaly, a gunman who attacked a kosher grocery store in Paris in January.

If it were substantiated that the Texas gunmen were terrorists in communication with Hassan, it would be an example of what authorities have said they fear: that a person raised in the United States might be radicalized, travel abroad and go on to inspire terrorist attacks on American soil.

“If only we had men like these brothers in the #States,” he tweeted, “our beloved Muhammad would not have been drawn.”

Hassan, who said on his profile that he supports the ISIS terrorist group, proclaimed that he’s “ashamed of the Muslims of #US.”

“I regret being from there,” he said.

Hassan, formerly a student at Roosevelt High School in Minneapolis, left for Somalia in 2008 at age 17. He was indicted on terrorism charges the following year.

Twitter has suspended Hassan’s accounts repeatedly, but the militant has opened new ones. For a profile photo on his now-suspended 31st Twitter account, he used an image of Troy Kastigar, a Muslim convert from Minneapolis who was killed in Somalia in 2009 after joining al-Shabab.

David Ibsen, executive director of the Counter Extremism Project, considers Hassan one of the most influential terror recruiters to have taken to Twitter. Ibsen’s New York-based nonprofit works to remove radical propagandists from the digital sphere, but it’s had little success in stopping Hassan — who frequently boasts about his ability to resurface, Ibsen said.

Hassan has a unique set of skills that make him valuable as a recruiter, Ibsen said. Aside from his involvement with al-Shabab, Hassan is an adept user of social media who can use technology to communicate with those in immigrant communities who might be feeling disaffected or alienated.

“Miski is one of the most prominent figures who’s out there,” Ibsen said. “He knows how to manipulate those feelings for the purpose of the organization.”

And it’s not the first time Hassan has made a specific call for violence on Twitter. He also suggested the beheading of Frances Townsend, the Counter Extremism Project president and former homeland security adviser to former President George W. Bush, Ibsen said.

Although Twitter has made strides in updating its policies on extremism in recent weeks, the company could dedicate more resources to removing radical rhetoric promptly, Ibsen said.

On his Twitter account, Hassan claimed to have communicated with one of the suspected Texas gunmen. “He was truly a man of wisdom. I’m gonna miss his greeting every morning on twitter.”

The FBI said it is aware of Hassan’s alleged communication with the gunmen, but did not provide further details.

Though he’s with al-Shabab, Hassan represents himself as a supporter of ISIS and had encouraged young Minnesota men to join the group.

For instance, Hassan had a series of private communications via Facebook with Abdi Nur, a Minneapolis man who joined ISIS, as detailed in a criminal complaint against Nur.

According to the complaint, Hassan asked Nur: “…us brothers from mpls wanted to know how many you guys are back there in sham (Syria/Iraq)?”

“…only three ouf us,” Nur replied, adding, “the others there still workin making hijrah (migration).”