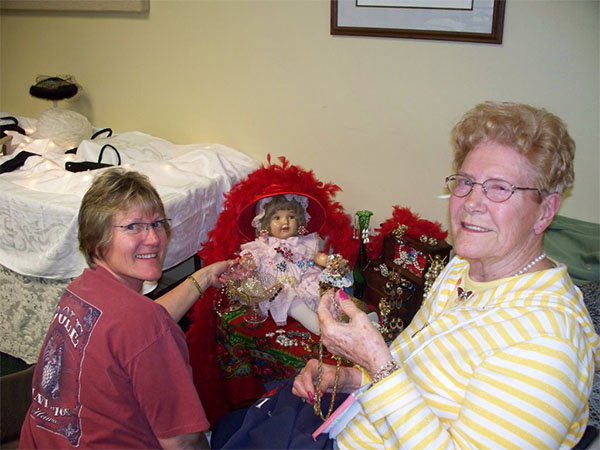 Wanda Wangsness and her mother, Ida Mildenstein, work on a display of jewelry for the 2010 Mother’s Day tea. — Provided

For the last 40 years, St. John’s Lutheran Community has had a Mother’s Day tea. 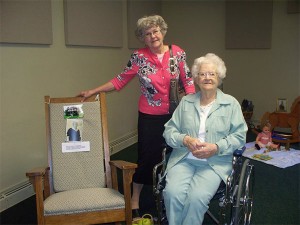 St. John’s Lutheran Community resident Pearl Lindeman with one of her daughters at the 2013 Mother’s Day tea. Lindeman is with her rocking chair, as the theme for that year was rocking chairs. — Provided

Now in its 41st year, the tea — which had the theme of Grandma’s Garden — has a long legacy attached to it.

“How many things last that long?” asked Wanda Wangsness, who works at St. John’s.

Wangsness’s mother, Ida Mildenstein, worked with St. John’s too before she was a patient with Alzheimer’s disease. Wangsness said the memories from the Mother’s Day tea with her mother are cherished.

There was always strawberry shortcake and the mothers always had to get their hair, makeup and nails done before the event. Back in the initial years of the tea, the women would dress up in their Sunday best, Biedermann said.

“We made it a special day,” she said.

The first year of the tea, the theme was wedding dresses, and Biedermann wore her own wedding dress to the event.

Other themes throughout the year included hats, accessories and rocking chairs. 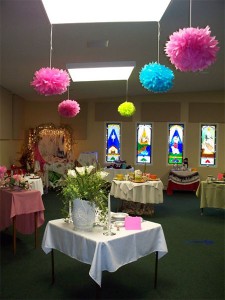 In 2012, the Mother’s Day tea theme was table settings. — Provided

In the past, the tea was held in the afternoon, but now it is held over lunch. One thing has remained the same, however — the tea is held the Saturday before Mother’s Day, to give the families of residents time to spend with other family members on the actual day of Mother’s Day.

Wangsness and Diane Wichmann, public relations for St. John’s, said they expect about 400 guests, as the resident women can bring as many guests as they like. If the women don’t have any daughters, they are welcome to bring close friends, church members or even their sons.

The tea would also have a display relating to the theme, and residents often brought their own items to add to the display. Wichmann said this helps the women take ownership of the tea.

“It really knits them together,” Wangsness said.

Lindeman said it’s wonderful her family can be together and get dressed up for the occasion.

“Love your children, every day,” she said. “That’s the most important thing.”