Student wins for essay about importance of vets 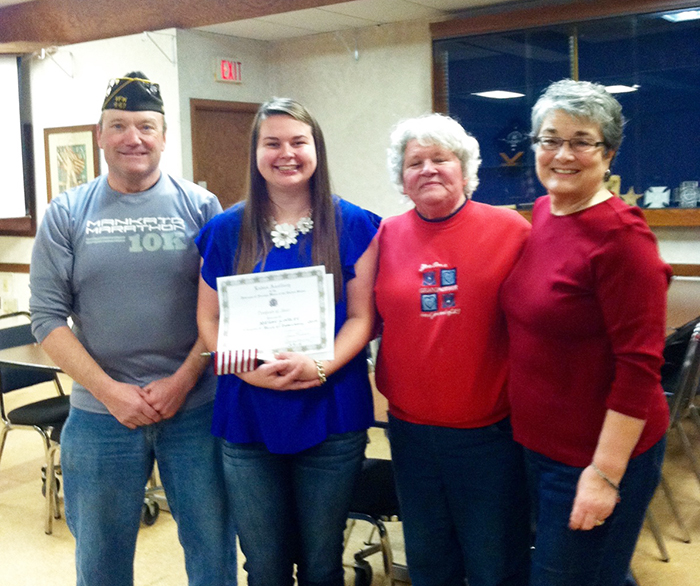 Albert Lea High School senior Megan Lindely was the winner of a Voice of Democracy essay contest by Freemond Madson VFW Post 447. Lindely is the editor of the high school yearbook and enjoys reading, cooking and hanging out with her friends.

Lindely’s parents are Dave and Shelly Lindely and her grandparents are Terry and Peggy Vandersnick.

The following is her winning essay:

“Veterans are a key asset to this country. It is as simple as that. I tried to make this speech into an artistic extended metaphor about bravery, but a veteran’s courage, dedication and selflessness is beyond compare. Our country exists solely because of a war, one that would revolutionize the world and make America, a safe haven, a reality.

America was dreamt up by our forefathers but became a reality because of the brave, inexperienced men who fought the British redcoats and helped gain our freedom. They are the original veterans. They are the reason for our Constitution. Their sacrifice is the reason we have all the freedoms we enjoy today.

Throughout history America has been in its fair share of wars. Wars to free, a war that divided the nation in two, a war that would put Americans back to work after a depression, a war that soon included much of the world, a war that required a draft. It’s a part of our culture. Currently Americans are fighting terror throughout the world.

Sept. 11, 2001, is a day that people won’t soon forget. It is also one of the reasons our country has been at war for 13 years. For this nation to have a future we need to have brave soldiers to protect us. With the threat of ISIS consuming the nation’s news, and Al Qaeda a serious threat for years, we need a defense. We can’t just wing it with such serious groups.

Veterans weren’t always held at such high honors as they are now however. My Grandfather Terry was drafted into the military to serve his country in Vietnam. He left his girlfriend, now my grandmother, his friends and his family for a year of overseas fighting for his country and helping stop communism in Vietnam. When he came home there were no parades, no celebrations. It is a hard thought for me to have, but I am fully aware that my grandpa may not have come back, just like thousands of other people’s families, but he did. I’m here because he made it. Personally, a veteran is completely to thank for my future and my past. There are plenty of other people in my situation also. Not only will veterans impact the nation’s future but plenty of individuals’ futures.

Veterans are the reason we have one of the oldest constitutions in the world, the reason this is the land of the free and the home of the brave, the reason people are alive and also why these things will prevail for years to come.”