The onset of warm weather means gardeners are busy planting 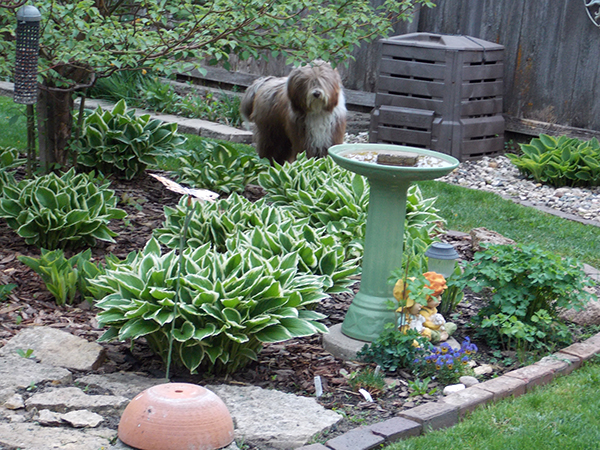 Roosevelt off to the side of the oval garden where the hostas are planted. Along the gray fence are the elevated gardens that he likes to visit. – Carol Hagel Lang/Albert Lea Tribune

This busy gardener is frantically planting all of the flowers she has purchased and it seems like each year my body is telling me to slow down. I drive a PT Cruiser and you would laugh if you could see me as I leave the garden center with it packed full of flowers. The other day I had three large carts full of flowers to stuff into my trusty vehicle. The sales clerk helped push out one of the carts with me and when she saw my little car she wondered how it was all going to fit into it.

Over the years I have learned how to pack this little car full so that the plants make it home without being broken. My back seats fold up against the front seat. I have three good sized trays and another smaller one that fit perfectly in the space. Since I had three shrubs that needed to find a place, I put them in front of the passenger seat on the floor. The next thing that needed to find a safe and secure spot was a gorgeous handing begonia basket so I popped it in the passenger seat and secured the seat belt around it. The second cart fit into the first row of trays. If I put them in sideways I could put two flats of flowers in each tray. So far so good, but I still had another cart of flowers to pack in the vehicle.

As the sales clerk brought me the third cart I gave her the empty second cart. I could see her eyes getting bigger as she wondered how of those flowers would fit into the car and where on earth would I put the rest of them. When the seats tilt forward I have room under the seats for smaller items so all of the little things (scrubbing brush, hummingbird feeder, twine, small gazing ball, red rooster ornament and several other items) fit nicely under there. I even had room to spare just in case I had forgotten to purchase something and needed to go back in for more.

The third cart was loaded the same way. With the two flats turned sideways I had room for four more flats of flowers. Behind the trays, at the very rear of the car, I could still stand smaller individual pots of flowers. Then there was a bit of room to put a couple of larger containers. When I returned the last cart I told the gal I still had room for two more plants. We both laughed as I really don’t think I wanted to go back and buy more of them just now.

Now that the plants are bought and sitting at my house in the two greenhouses, or under the gazebo, it is keeping me very busy watering them until they get planted. This morning I planted the bobo hydrangea in the expanded front garden while the two strawberry sundae hydrangeas went in large containers under the living room windows. These are such lovely hydrangeas. I planted these same ones last spring in the same gardens and wanted more of them. If you are looking for something that will work in a small garden I highly recommend both of these panicle hydrangeas.

This year I wanted to add a few more garden accents. I found the cutest little old work boots at one of the garden centers with room for just one nasturtium planted in it. After planting the one, I just had to go back and get another one to sit on the front step. They have frogs climbing on them and it seems like I have a frog theme developing in my gardens so they really are cute.

I still need to get the rest of my annual seeds planted and weeding out the self-seeders, but the planting of the containers needs to get done first. Otherwise I will be spending all of my time watering each of these containers of flowers sitting under the gazebo and in the greenhouses. So much to do and so little time during the busy month of May to get everything done that needs to be done, but eventually it will look beautiful.