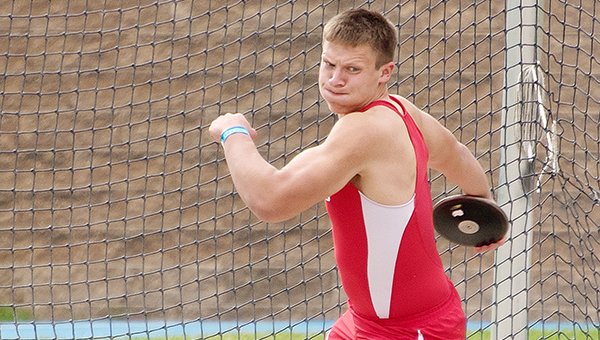 Tom Yezek of Northwood-Kensett spins before releasing the discus Friday during the Class 1A state track meet at Drake Stadium on the campus of Drake University in Des Moines. Yezek won the event with a toss of 172-4. — Lory Groe/For the Albert Lea Tribune

Last year, Yezek was in first place through the first five rounds with a toss of 157-7. On Goeller’s last throw, he heaved the disc 168-2 to take gold, and Yezek took silver.

The tables turned this year.

After Goeller took the lead with his first throw of 171-2, Yezek overtook the top spot on his third throw.

Yezek became the state champion with a personal-best toss of 172-4 Friday at Drake Stadium on the campus of Drake University in Des Moines.

“It was eerie how similar it was compared to last year,” said Northwood-Kensett head coach Dave Capitani. “That made this year that much more gratifying when Tom was able to hold him off.”

For the last three years, Yezek’s throwing coach has been

“I’d like to thank my coach,” said Yezek. “He’s helped me all the way through.”

“He’s been getting me to try to step through and pull through,” Yezek said. “We go through the form together, and it came together today.”

The Northwood-Kensett boys’ and girls’ track and field teams qualified for the state meet in a combined 12 events.

“It was great to see my teammates and all the work they do starting to pay off,” Yezek said. “Rewarding is the best way to put it.”

The Vikings competed in two boys’ and girls events Thursday on Day 1 of the three-day state meet.

Vikings compete in 6 events on Day 2

Along with Yezek’s state-champion discus throw on Friday, the Vikings participated in three other boys’ and girls events.