Funeral services for Viola “Vi” Elizabeth Halverson of Albert Lea will be at 11 a.m. Friday at St. Theodore Catholic Church in Albert Lea. The Rev. Timothy T. Reker and Deacon Mike Ellis will officiate. Visitation will be from 5 to 7 p.m. Thursday at Bonnerup Funeral Service and one hour prior to the service at the church. Interment will be in St Theodore Catholic Cemetery. 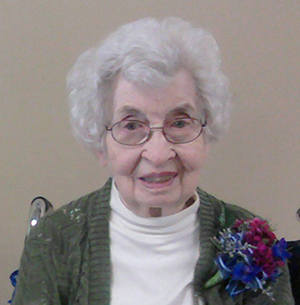 Viola “Vi” Elizabeth passed away on Sunday, May 17, 2015, at Thorne Crest Retirement Community, where she had been living for the past 10 years.

Vi was born on May 13, 1922, in Iona to Joseph and Theresa Ehleringer with her identical twin, Leola (Lee). Vi and Lee where married in an extraordinary double ceremony on June 20, 1949, in Iona to fraternal twins Henry and Harold. The two sisters were amazing women that enjoyed wonderful lives and an incredible bond.

Vi and her twin sister, Lee, attended Mankato State Teachers College and dedicated over 40 years to teaching school. She taught school at St. Mary’s, St. Theodore’s and was a teacher’s aide at Hawthorne Elementary School. The teaching theme was a constant in her life as she consistently put others in front of her own interests whether it was in the classroom or raising her five children.

Vi was an active member of St. Theodore’s Catholic Church until her health declined, and lived in Albert Lea for 56 years. She adored the Lord above and was filled with the love, compassion and care of the Holy Spirit.

In her free time Vi always enjoyed volunteering at church, sewing, crafting, entertaining, traveling, playing cards and spending time with her family. Vi was a woman that permeated the essence of being a great mother, sister and grandmother.

Vi is survived by her five children, Michael and his wife, Diana, of Lake City, Thomas and his wife, Kathy, of West Fargo, North Dakota, Paul and his wife, Suzi, of Sartell, JoAnn Bowman of Albert Lea and Jeanne and her husband, Mark Barlage, of Carlos; brother, John Ehleringer, of Mankato;  grandchildren Amy, Brian, Joey, Jamie, Melanie, Danny, Patty, Joshua, Eric, Carrie, step-granddaughter, Heidi, Zachary, Casie, Nicholas, Benjamin and Andrea; and seven great-grandchildren. Her deep love and care for her family was exemplified on a daily basis and made her an endearing guide in many people’s lives.

Her family states, “Although Vi, the wife, mother, sister and daughter has passed, her memory will live on, as everyone she encountered in her life could not have a bad thing to say about her. She was devoted in everything she did and her and Henry are now smiling down on all of us. The world is an exponentially better place due to Viola Halverson’s time here. Thank you, Vi, for the amazing journey and your love. We will miss you.”