Funeral services will be at 1:30 p.m. Friday at St. Olaf Lutheran Church with Todd Portinga, Associate in Ministry, officiating. Interment will be at Oakwood Cemetery. Visitation will be from 4 to 7 p.m. Thursday at Clasen-Jordan Mortuary and at the church on Friday for one hour before the service. 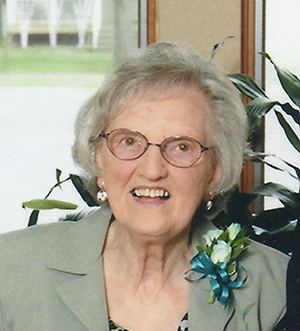 Vlasta was a long-time member of St. Olaf Lutheran Church. After starting her family, she was a stay-at-home wife and mother. She enjoyed sewing, knitting and playing cards with the neighbors. Vlasta loved spending time with the grandchildren and the great grandchildren, enjoying their many sleepovers at “Grandma V’s.”

Vlasta is survived by her daughters and sons-in-law Darlane and Robert Muilenburg of Hollandale, Diane and Michael Runtsch of Forest Lake and Deloris and Steven Ashton of Blooming Prairie; nine grandsons and their wives, Chad and Allison Muilenburg, Mark and Holly Muilenburg, Adam Muilenburg, Kyle and Cathy Runtsch, Brendt Runtsch, Nathan Runtsch, Ryan and Jordan Ashton, Derek Ashton and Tyler and Danica Ashton; 11 great-grandchildren; and sister, Emily DeVriendt, of Austin.

She was preceded in death by her parents; husband, Dale; sister, Mary Ann Rezac; and brother, Joseph Hrabak.