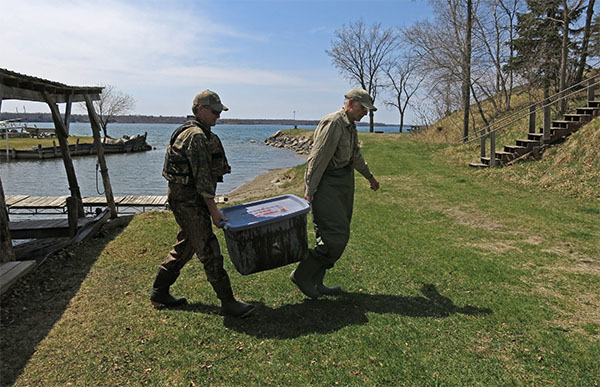 Every year around ice out, the Leech Lake Band of Ojibwe and the DNR hire Jim Carlson and Dave Kuehn to set up on Pelican Island for a few weeks and kill about 1,000 cormorants. On April 30, 2015, they returned to shore 145 pounds of cormorants stacked in tubs. — John Enger/MPR News

MILLE LACS LAKE — Curt Kalk has harvested walleye from Mille Lacs every spring since he was 9, when he’d pull gill nets with his grandfather and uncles.

“It never dawned on me,” said Kalk, 52, a Mille Lacs Band of Ojibwe tribal member, “that they were teaching me what other people thought was wrong.”

When it comes to walleye in Minnesota, what’s right and wrong is hardly ever black and white. The fish remain the prized catch of Minnesota anglers. But worries over invasive species, climate change, tribal netting and the fishery’s long-term health are clouding this year’s fishing season, which opened Saturday.

The worries flow together at Mille Lacs.

The tribe recently finished gill netting thousands of pounds of walleye during the fish’s spawn this spring. Walleye numbers in the lake are at a 40-year low, which led the state Department of Natural Resources to place its toughest walleye limits ever on non-tribal anglers.

That prompted local resort owners to renew calls to stop tribal netting, even though biologists say netting is not a factor in the shrinking walleye population.

“If tribal netting during the spawn was interfering with the ability of walleyes to produce young fish, then we would see it when we start assessing those young fish when they’re less than a half a year old, during their first summer and first fall,” said DNR fisheries chief Don Pereira.

Pereira says they’re finding more of those young fish than ever before but for some reason, huge numbers are dying before they become adults.

It’s likely connected to Mille Lacs’ rapidly changing ecosystem, he added. The water is warmer and clearer. It’s infested with invasive species like zebra mussels and the spiny water flea. DNR still needs to test that hypothesis, he added.

Without an absolute answer, those who worry over the walleye are left to their own theories.

The tribal practice has held up in court.

In 1837, the Mille Lacs and seven other Ojibwe bands, signed a treaty with the U.S. government. The tribes gave up most of their traditional land base. In exchange, they retained the right to hunt, fish and gather on the ceded territory, which includes Mille Lacs.

In 1999, the U.S. Supreme Court upheld those hunting and fishing rights. Now, eight Ojibwe bands, together with the Minnesota DNR, co-manage the lake’s walleye fishery. Every winter they determine the sustainable harvest level. Then they divvy it up.

Eno thinks Minnesota should go back to court to try to end tribal netting. But others say hostility has faded from the 1990s, when tribes first started exercising their newly affirmed treaty rights.

“I do see great progress from the early days of the rock throwing and pipe bombs at the boat landings over here in Wisconsin,” said Jim Zorn, who directs the Great Lakes Fish and Indian Wildlife Commission.

Zorn and others say tribes and the state need to continue to work together to ensure there are fish for everyone in the future, rather than fight over the shrinking walleye population.

For most band members, catching fish isn’t a sport, said Mille Lacs Natural Resources Commissioner Susan Klapel. Tribal members are harvesting food as efficiently as possible, she said as she showed off one of the 100-foot-long gill nets that band members string across shallow water after ice-out when walleye congregate to spawn.

“It’s a staple … we depend on the lake for the sustenance we get,” she said. “It’s our grocery store.”

Eno and other resort owners, however, say they and other non-tribal members suffer when the band nets.

“The Supreme Court did not rule in the favor of the tribes to end up with a walleye population that has been practically depleted,” she said. “Ten years ago we shared 600,000 pounds with the tribes, this year we share 40,000. What happened?”

There doesn’t seem to be much common ground on the walleye beyond the fact that they are good to eat. But in the kitchen of his cabin in the woods near the lake, Kalk shared some philosophy along with plates of frybread and fresh fried chunks of walleye.

“We’re not here by accident. We’re here for a reason,” Kalk said of the band. To them, the walleye is a resource, “something our great grandfathers knew needed to be in a treaty, to say we need these things to survive.”