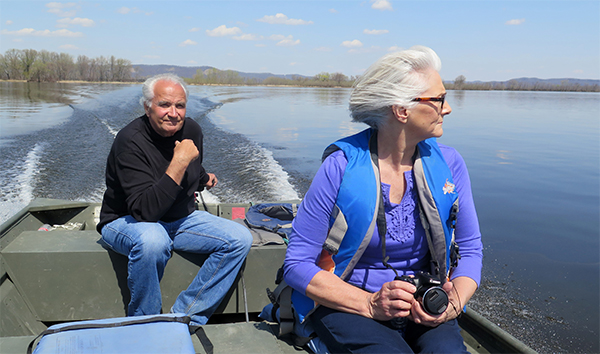 Winona area wood sculptor Leo Smith and his wife, Marilyn, make frequent outings from their river’s edge home two miles downriver from Winona on the main channel of the Mississippi. Smith said the river is a source of inspiration for many of his sculptures. — Dan Olson/MPR News

WINONA — Wood sculptor Leo Smith is best known in some circles for his commercially successful sculptures of Santa Claus, a cultural figure he calls a “big, big totem.”

Smith, 68, has sculpted the jolly old man in some unusual settings — on a polar bear, astride a bison, even riding a trout.

His commercial success creating Santas and hundreds of other figures established Smith’s reputation worldwide as a folk artist.

Many of his wood sculptures reflect the objects and scenes he has encountered during a lifetime of exploring the Mississippi River near his Winona-area home. 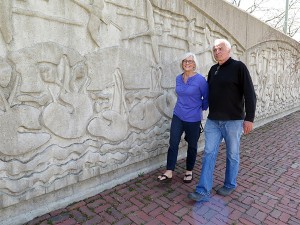 A 300-feet-long concrete floodwall in downtown Winona that protects the city from rising Mississippi river water was made in the mid-1980s from a wood sculpture by artist Leo Smith, who walked along the river wall with his wife, Marilyn, on April 17. — Dan Olson/MPR News

Smith creates most of his wood sculptures in his studio in Fountain City, Wisconsin. Before she retired, his wife, Marilyn, painted them and oversaw a retail shop there.

“Leo would make a piece and hand it over to me, and I would paint it, and when it was completed we’d put it on our kitchen table and sit back and admire it,” she said.

Leo Smith also has retired from the business of making art for commercial reproductions, but not from making art.

He still has a studio in Fountain City but they now live in the village of Homer, on the Minnesota side of the river about two miles downriver from Winona.

Their home is on the west bank of the Mississippi, between the river and the train tracks that run behind their house.

Retirement leaves Marilyn Smith much more time for their 11 grandchildren. Both enjoy exploring the river in their green, flat-bottomed jon boat.

On a recent ride, they viewed a flock of white pelicans, huge birds with nine-foot wing spans that have taken up residence nearby.

“You know they were hunted originally for food and for the feathers,” Smith said. “Now they’re back, and we’re very happy to have them back.”

Smith has been attracted to the river since he was a boy. At 13, he had a boat and motor with clear guidelines from his father, a Winona tailor.

“’Here’s how to start it. Here’s how to turn it off. Come back for supper,’” Smith recalled his father telling him. “I mean, that was the instructions.”

More of Smith’s art these days is abstract.

The sculptures floating just offshore from the couple’s house came to him in a dream. In it, he was pursuing one of his passions: exploring the river for interesting rocks or logs ­— anything that might become art.

In his dream, he was about to pluck an oar handle from the water when an old, bearded man appeared in the boat. As it turns out, the man was God and Smith was about to make off with some of His things.

That inspired Smith to create a, “dreamscape,” a work of floating objects in the shallows near his home.

The art inside the Smith house includes a huge ivory-billed woodpecker mask and a massive mahogany sculpture of manatees, among many other objects.

Smith sometimes adds words to his sculptures like those around the base of a turtle.

“Although some mistake a cacophony and sense of speed for living, on this island one learns that the world though made is yet being made,” he said.

Smith learned to sculpt wood from Konstantinos Papadakis who teaches woodcarving in his Minneapolis studio.

Every so often there’s a Leo Smith wood sculpture exhibit at the Minnesota Marine Art Museum in Winona, which owns 400 of his works.

His biggest creation, in downtown Winona, is very public and functional. In the 1980s the Army Corps of Engineers commissioned Smith to sculpt a river scene that would become part of the flood levee.

He created a wood sculpture of birds, water lotus, grass and river bluff. Concrete was poured around a rubberized mold of the sculpture. The result is a 300-foot-long section of concrete flood wall along the river in downtown Winona.

“We’re tied to the levee, so to speak,” Smith said. “You could do worse than to be dedicated to one place. You could do very much worse.”