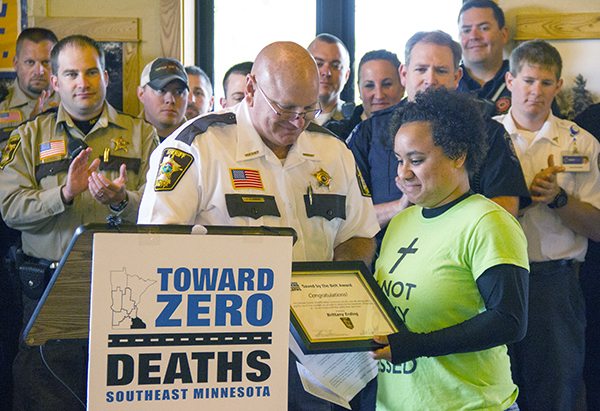 A 20-year-old crash survivor was honored Monday during a ceremony at Edgewater Park for wearing a lifesaving seat belt in a crash in January.

Brittany Erding of Preston said she was driving home on Fillmore County Road 5 near Forestville State Park one night in January when she hit a slippery patch of road, lost control of her vehicle and careened over a 40-foot cliff, crashing into the middle of the partially frozen Root River.

When icy water started to fill up the front of the car, she unbuckled her seat belt and climbed into the back of the car. She then climbed out of the car and onto chunks of ice to get out of the river. She then walked to a neighbor’s home.

“I believe that God was watching over me that night and kept me safe,” Erding said. “Thanks to the help of God and my seat belt I am here today.”

Her message is clear: “Buckle up every time.” 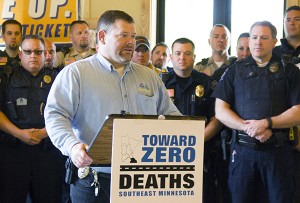 Erding was honored with a Saved by the Belt Award in front of dozens of law enforcement officers and medical personnel from across the region on what was the first day of a statewide Click It or Ticket seat belt enforcement campaign. The campaign continues through May 31.

“Brittany is a living example that seat belts save lives,” said Fillmore County Sheriff Tom Kaase. “Hopefully, her story will persuade others to buckle up — because you never know when you may be involved in a traffic crash.”

Using a safety restraint reduces the risk of death or serious injury by 40 to 60 percent, according to the Minnesota Department of Public Safety Office of Traffic Safety.

Kristine Hernandez, statewide Toward Zero Deaths coordinator, said across the state, there is a 95 percent seat belt compliance rate. But out of the people who died in traffic crashes in 2014, half were not belted.

Of the 361 deaths in people killed in traffic crashes in 2014, 49 of those fatalities were in southeastern Minnesota. Of the 49 people who died, 14 were unbuckled.

She said since the Toward Zero Deaths program began in 2003 there has been a 45 percent reduction in traffic-related deaths.

The program focuses on education, enforcement, engineering and emergency trauma response, but Hernandez encouraged people to speak up and be a positive influence as well. According to the National Highway Traffic Safety Administration, when asked to do so, 9 out of 10 people will fasten their seat belts.

“We can influence others,” she said.

Albert lea Police Department Lt. Jeff Strom said Minnesota law requires drivers and all passengers to be wearing seat belts or properly restrained in a child seat. He said officers can pull a vehicle over for any unbelted passengers.

Freeborn County Sheriff Kurt Freitag said more than 70 percent of fatalities happen in rural Minnesota. In some instances people not wearing seat belts are ejected from their vehicles during rollover crashes and then the vehicles may roll over on the person.

He said the best defense to prevent traffic deaths is to buckle up.

Seat belts should be worn low and snug across the hips, and shoulder straps should never be tucked under an arm or behind the back.