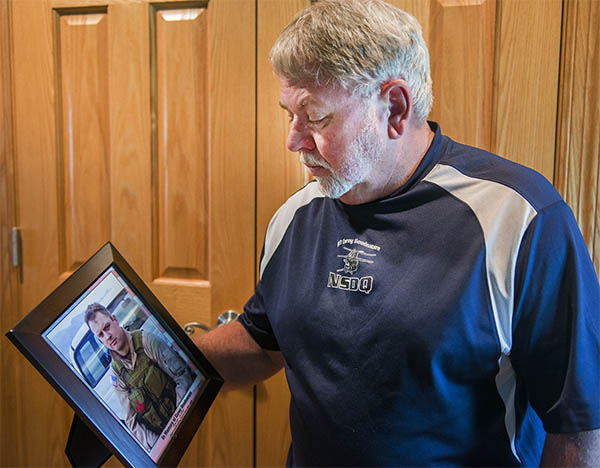 Don Goodnature holds a photo of his son, Corey Goodnature. Warrant Officer Corey Goodnature was one of 16 killed when his company’s MH-47 Chinook helicopter was shot down June 28, 2005, in Afghanistan while attempting to rescue missing U.S. Navy SEALs. — Colleen Harrison/Albert Lea Tribune

In June 2005, Don and Deb Goodnature of Clarks Grove received a phone call that no parent hopes to ever receive.

Don Goodnature said he had just finished golfing when he noticed he had six or seven missed calls on his phone.

Upon investigating a little further, he said he found out his son, Corey, a chief warrant officer in the U.S. Army, had been in an accident, and the helicopter he was flying had been shot down in Afghanistan.

A few days later, they found out that Corey, a pilot for the 160th Special Operations Aviation Regimen, had died.

Corey Goodnature and 15 others in the MH-47 Chinook helicopter were responding to a call of a team of Navy SEALS that had come under intense fire in the mountains of eastern Afghanistan. All of the others in the helicopter also died, along with all but one of the SEALS they had attempted to rescue.

“We were devastated of course,” Don Goodnature said.

Today marks the 10th anniversary that Corey Goodnature and the others died. Corey Goodnature, a 1988 Albert Lea High School graduate, was the first Minnesotan to die in Afghanistan.

“It feels like it’s only been a couple months, but it’s something you think about every day,” his father said. “It’s something a parent is not supposed to do — outlive their kids.”

Corey Goodnature was married at the time, and he and his wife, Lori, had two children. He was stationed out of Savanna, Georgia. His father said he enjoyed hunting and fishing.

A year after Corey Goodnature’s death, area farmer Gary Pestorious came up with the idea to start the memorial golf classic to honor the soldier and to raise money for local students with scholarships. Saturday marked the ninth year of the event.

Don Goodnature said he only expected to raise $6,000 or $7,000 with the event that first year, but it has brought in much more.

The scholarship form asks the applicant to write about what patriotism means to them.

“The whole purpose of doing this is so you don’t forget,” Don Goodnature said. “By doing this, we get to talk about Corey, but also we honor all other veterans and people who have been killed there.”

This year’s golf tournament was expected to have a large turnout and many family members and friends were slated to attend.

Don Goodnature said eight or nine pilots his son served with were also expected to come. Corey’s wife, who now lives in Mobile, Alabama, was expected to attend. 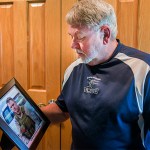 Don Goodnature holds a photo of his son, Corey Goodnature. Warrant Officer Corey Goodnature was one of 16 killed when his company’s MH-47 Chinook helicopter was shot down June 28, 2005, in Afghanistan while attempting to rescue missing U.S. Navy SEALs. — Colleen Harrison/Albert Lea Tribune 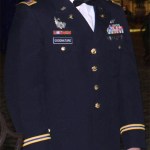 Corey Goodnature was a pilot for the 160th Special Operations Aviation Regimen. — Provided 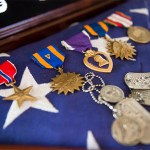 Deb and Don Goodnature keep their son’s medals and honors — a Purple Heart and a Bronze Star, among others — with the flag given to them in honor of Corey Goodnature’s service to the U.S. military and to his country. — Colleen Harrison/Albert Lea Tribune 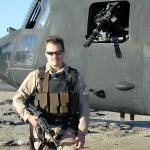