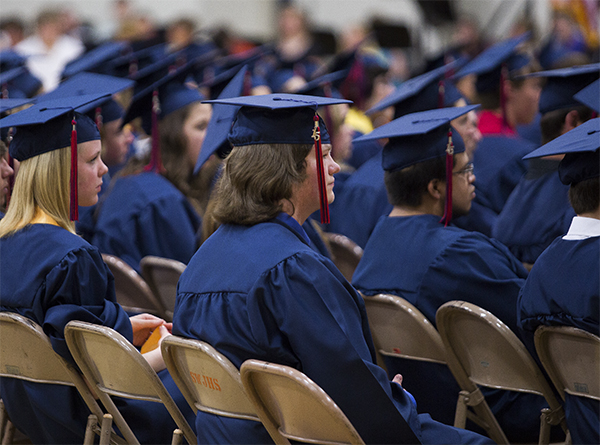 Those three G’s are something that Albert Lea High School graduates took away from their commencement ceremony on Friday. 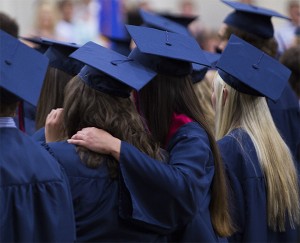 Students and friends comfort each other during their commencement processional Friday at Albert Lea High School. — Colleen Harrison/Albert Lea Tribune

Albert Lea seniors graduated at 7 p.m. Friday in the gym at the high school.

Adenuga Atewologun, president of Riverland Community College, spoke to the graduates during the ceremony.

“You have accomplished an important milestone,” Atewologun said at the opening of his speech.

He said that 40 years ago when he was graduating high school, he never would have thought he would end up the president of a college so far from where he grew up in Namibia, especially in a place as cold as Minnesota.

The three points Atewologun wanted the students to remember and use in their coming years were goals, grit and gumption.

Atewologun said without goals, people can drift. He explained the importance of setting both short-term and long-term goals, and working towards them.

While GPA is important, that wasn’t one of the G’s Atewologun explained to the graduates. Instead, he talked about grit, which he said can be more important 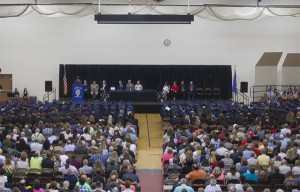 Atewologun defined grit as courage or resolve, and said studies show people who work hard are more likely to succeed than those who were at the top of the class academically.

Lastly, Atewologun told the graduates to have gumption. Gumption isn’t a word often used, he said, so he defined it as having a spirited mission or being resourceful.

Atewologun said if the graduates remember to set goals, have grit and have gumption, they will have a much higher chance at being successful.

He had some other words of wisdom to impart on the graduates as well.

“Do not fret about decisions you make in the next year or two,” he said, and told the students to ask for help when they need it.

Connor Larson and Anna Englin, who were chosen by their class to speak during graduation, also had some words of wisdom for their classmates. 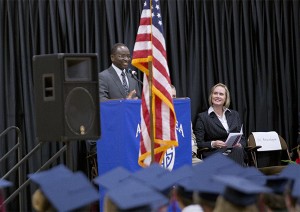 “We’ve been through a lot together,” Larson said to his classmates, and Englin encouraged the graduates to always be passionate.

And as Superintendent Mike Funk presented the class of 2015, he also imparted some lessons to the graduates, and said the most important things are the things learned in kindergarten, such as sharing, playing fair, not hitting others, cleaning up messes and saying sorry, among others.

Above all, the speakers all encouraged the graduates to thank the people that made their graduation possible: teachers, school administration, school staff, school board members, their friends and their families.