After years of limits, exchanges coming to employer health plans 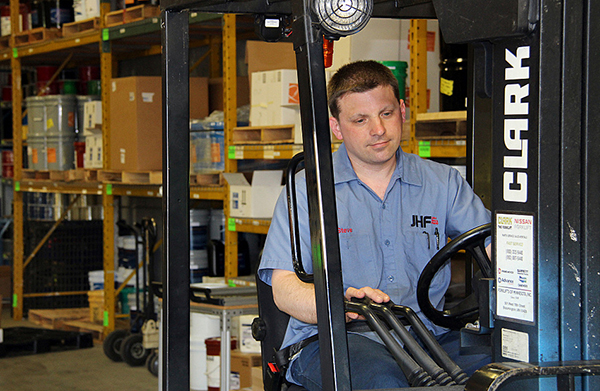 Steve Heller works in the warehouse of John Henry Foster in Eagan. Heller said he prefers the new way of selecting health insurance on a private exchange. – Mark Zdechlik/MPR News

EAGAN — For years, workers who receive health insurance through their employers have had a limited choice of health plans.

At John Henry Foster, a company that distributes hydraulic and air compression equipment, workers long had to accept a plan from a couple of choices offered by their employer.

“They just presented what we get,” said Steve Heller, a forklift operator who has worked at John Henry Foster for 15 years.

But these days, the company’s employees have dozens of choices.

Depending on whether they buy insurance for a single person, two people or a family, Heller and his co-workers receive from $350 to $1,000 a month from the company to purchase their plan.

They’re then directed to a privately run Medica exchange that offers a selection of options. Employees can choose high-deductible plans with relatively low monthly premiums or they can pay more each month to have more of their care and medications covered.

Across the country, employers increasingly are giving workers a choice of health plans, an effort that aims to help keep rising health care costs from spiraling out of control.

At John Henry Foster, Heller went for the higher premium and broader coverage. He said determining what choice to make was a bit overwhelming at first, but there was help.

“They have a person you can talk to and you can tell them what prescriptions you have and what your family does,” he said.

Employees also may visit a Medica website designed to guide employees to plans that best suit them based on their health.

Three years after the switch, Heller is satisfied. He said the new plan works better for him than the old one.

The company’s managers also are happy with the private exchange.

“In 2012, we were actually faced with a 30-percent increase in our medical benefits unlike anything we had ever seen before,” said Jan Hawkins, co-owner of John Henry Foster.

Hawkins said company leaders decided to sign up for a private exchange run by Medica because they could choose to spend about 10 percent more on health benefits in the first year, instead of the projected increase of 30 percent for the old plan.

Since then, the company has increased the subsidy workers can spend on health insurance by 8 to 10 percent. Hawkins said the move has worked well for employees and the business.

“I think it definitely helps us from an operational budget standpoint,” she said. “We’ve just seen only positive from this.”

Despite the benefits, John Henry Foster is one of relatively few businesses making the switch to a private health insurance exchange. According to Kaiser Family Foundation research, last year only 3 percent of employers, excluding the federal government, sent workers to private exchanges. But four times that number were considering moving to an exchange.

Jim Bonnette, executive vice president of the Advisory Board Company, a consulting firm for hospitals and health systems, predicts many employers will make the switch to help limit health care inflation.

“I would say a majority of the companies will switch to private exchanges,” he said.

Bonnette said many people will choose high-deductible plans to reduce their monthly premium cost and they will be much more motivated to search for the best prices.

Rising deductibles already are fueling explosive growth among low-cost retail care providers such as MinuteClinic. Bonnette said such providers will be taking over a lot more of the visits that are currently being handled at conventional clinics.

“They’re coming in at a price less than physicians charge,” he said, adding that consumers will be focused on their expenses. “If that deductible (is) the first amount of money that goes out comes out of my pocket, I’m going to think about where I spend it.”

Bonnette said wide adoption of private exchanges could finally make people sensitive to the price of health care, a goal that has eluded health policy makers for decades.

“We can’t afford the trend that is the increase in cost per year that we currently have,” he said.

The challenge, Bonnette said, will be convincing people to think differently about how they receive care and how much the different choices will cost them.

But Kim Wagner, president of Preferred Benefit Concepts Inc. of Eden Prairie, said predictions of a big shift to private exchanges are overblown.

“Half of the employers are looking at it right now but there’s not a mass exodus,” said Wagner, who sets up employee health plans, primarily for large corporations.

Wagner said some employers are adding more health plan choices for workers. But she said giving employees a set amount to buy insurance on an exchange could alienate workers and increase turnover.

That amounts to a pay cut for workers who choose more coverage than the company subsidy will buy, Wagner said.

She said the defined contribution plan shifts expense not just from the employer to workers, but from healthy workers to those who are less healthy and require more doctor visits and prescription medications.

“The concept of defined contribution of health care has been around for a while,” Wagner said. “It hasn’t taken off particularly in the large employer space because truly it’s a cost shift.”

Cathy Tripp who designs exchanges for Towers Watson, a human resources company, said sicker workers have always paid more for care. She said giving them the opportunity to shop for a plan could lead them to more affordable coverage.

“Our firm’s invested a lot of money in the exchange business,” she said.

Tripp said after slowing in recent years, early indications are that the growth rate of health care costs is picking up again. That will push more employers to private exchanges, especially small businesses, she said.

Whether private exchanges are the next big thing, it’s clear that employers have a powerful tax incentive to contain their health care spending before the “Cadillac” tax kicks in 2018. The provision in the Affordable Care Act imposes a 40 percent tax on employee health benefits the government deems too generous.

Towers Watson predicts 48 percent of employers will have to pay the tax in its first year and that the percentage will keep increasing thereafter.

Still, convincing a company to move to an exchange can be difficult, Tripp said, even though executives are focused on costs.

“When you get down to the people that are working in the trenches with employees, the HR department, you know their job has been to help and coddle and empower employees along the way,” she said. “So they see it as a take away.”