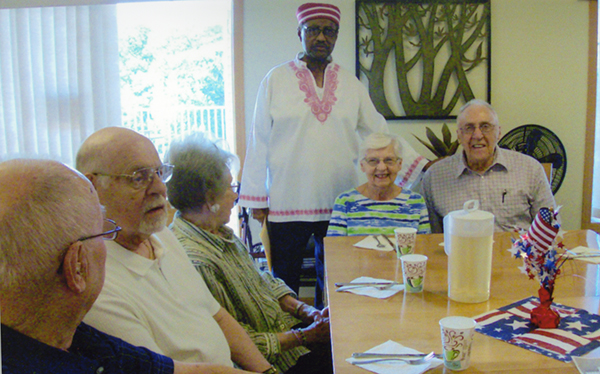 John V. Smith and his wife, Elaine, residents of the Village Coop. of Albert Lea, led about 60 people in a celebration of Juneteenth.

Juneteenth has been celebrated for many years by African-Americans on June 19 of each year in remembrance of the Emancipation Proclamation, which was announced by President Abraham Lincoln on Jan. 1, 1963. It wasn’t until June 19, 1865, that slave owner Logan A. Stroud of Limestone County, Texas, read Lincoln’s proclamation to an assembly of 150 slaves. This is the reason the celebration is on June 19.

Elaine Smith introduced the evening with piano playing of several African-American spirituals. Then, John Smith shared information about the history and meaning of Juneteenth. He said the Emancipation Proclamation is for everyone. While it freed African-Americans from the bondage of slavery, it is an American proclamation. “When one group is freed, it frees us all.”

The Pledge of Allegiance was followed by a prayer led by John Smith.

The group sang “Lift Every Voice,” also known as the “Negro National Anthem.”

John Lowery, owner of Conger Catering, then sang a solo, “In Moments Like These,” which brought tears to several people’s eyes.

After these songs, Conger Inn Victory Catering served a barbecue dinner for all which included ribs, greens, cornbread, potato salad, dessert and drinks.

The anniversary of June 19 has always been celebrated in the South, however, it is now being celebrated in most northern states as well.