Funeral services for Alberta M. (Leonhardi) Van Hal will be at 2 p.m. Saturday at Community Lutheran Church in Geneva. The Rev. Kristen Venne will officiate. Visitation will be from 12:30 p.m. until the time of the service at the church. Interment will take place at Hollandale Cemetery. 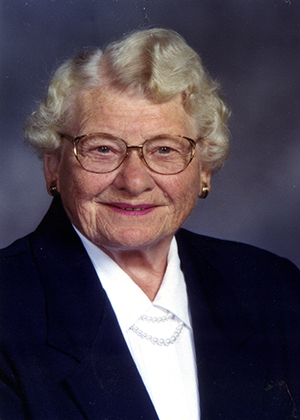 She was born in Albert Lea on Sept. 7, 1925, to Albert and Cora (Steele) Leonhardi of Alden. She was baptized and confirmed at Grace Lutheran Church of Alden. Alberta graduated from Alden High School and Minneapolis Business College. She worked at Wilson & Co. in Albert Lea and Federated Mutual Insurance Co. of Owatonna.

Alberta married Walter Van Hal on Sept. 20, 1953. They farmed together near Hollandale until 1979, when they moved to Geneva. During their 40 years together they enjoyed woodworking, crafts, playing cards, snowmobiling and traveling to all states in the union.  They belonged to an RV camping club where they spent most of their weekends.

They belonged to Redeemer Lutheran Church of Alden until 1982, when they transferred to Community Lutheran in Geneva. Alberta was active in CLC, Rebecca-Ruth Circle, Evangelical Lutheran Church of America, Sarah’s Bible Study Group, East Geneva Neighbors Club and Friendly Campers Club. She continued participating in the RV Camping Club after Walter died in 1993, up until she was 85. She planned and looked forward to friends stopping by for coffee and goodies, especially after church on Sunday mornings. She will be missed by friends and family.