ALEAP kicks off with a big group 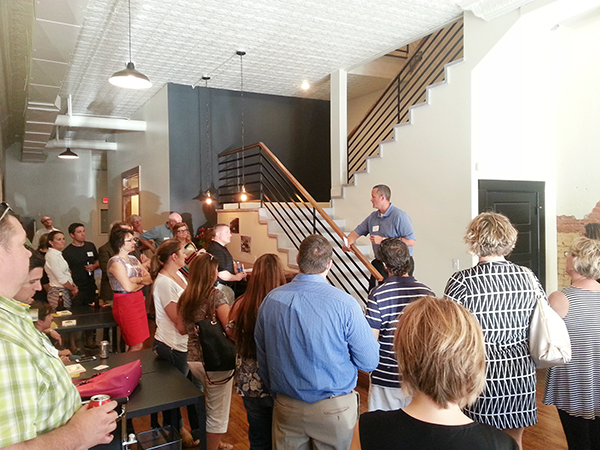 Over 50 people joined together on June 9 to kick off the Albert Lea Entrepreneur Advancement Program.

This multi-pronged community initiative will create opportunities for entrepreneurs in Freeborn County.

ALEAP began as an idea of Albert Lea participants at the 2014 Blandin Community Leadership Program.

The cohort of five was encouraged through the BCLP to develop and sustain a healthy Albert Lea by identifying the community’s strengths.

Adams, Anderson, Holt, Katz and Lord chose entrepreneurship as the local asset upon which to focus.

“Most thriving towns have something for which they are well-known; this characteristic attracts people,” Lord said. “Albert Lea has one major trait in that the majority of businesses in town were started by people in the back of their garages or in their parent’s basement. Entrepreneurship could be the point of prominence for Albert Lea.”

ALEAP seeks to develop a diversity of jobs and businesses in the community.

“We wanted to work to increase the number of jobs in the community,” Lord said. “Short of bringing in a new factory or other major businesses for which we don’t have the work force to fill jobs, we decided a smaller scale more personal focus would be a good idea. Whether starting a business or patenting and selling an idea, ALEAP is the perfect catalyst for anyone at any phase of the entrepreneurial discovery process.”

The ALEAP initiative has five components: a six-week training course, a monthly mentorship and networking gathering, a “Shark Tank” contest, a co-working space and a microloan program.

The June 9 inaugural event was the beginning of the overall ALEAP initiative. It was held at 137 S. Broadway in the offices of The Marketing Plant and The Outlet.

“Our goals at The Marketing Plant are very harmonious to ALEAP,” Lynne said. “We’re both working to support the local growth of small businesses and entrepreneurs. Abby and I are so pleased to partner with ALEAP and play a role in achieving these community objectives.”

The monthly mentorship and networking gatherings will be held at The Outlet; this space is, as well, the collaborative work environment available to current and budding entrepreneurs.

“The Outlet is a collaborative workspace for entrepreneurs, freelancers and corporate refugees,” Murray said. “The space is designed to provide both privacy and socialization for members. We offer areas for individual work, collaboration and a conference room. All the amenities important for day-to-day business needs and more are available now at The Outlet right here in downtown Albert Lea.”

“We’re currently designing the training course,” ALEDA executive director Ryan Nolander said. “Participants can expect to gain knowledge about the significance of a business plan, finance and accounting, human resources and personnel, marketing, strategic planning, and more topics relevant to their future as a successful entrepreneur. Each student will leave the course with a business plan that may be used to implement their venture.”

The “Shark Tank” and microloan program are components of ALEAP that will begin later in 2015.

Potentially known in Albert Lea as the “Tiger Cage,” the “Shark Tank” concept will allow local entrepreneurs to share their ideas with investors. Participating entrepreneurs will receive feedback and possibly an investment to assist in the launch of their business.

“Our Albert Lea ‘Tiger Cage’ will be one of the final components of the overall ALEAP program,” Adams said. “It will be an exciting opportunity to build community support and enthusiasm about entrepreneurs in Albert Lea through a fun game-like atmosphere. We’re envisioning the event occurring in November or December of this year.”

The next chance to be involved in ALEAP will be the July 16 event at The Outlet featuring John and Danielle Schipper. These ingenious entrepreneurs will share tips and strategies gained from their efforts as the proprietors of Schipp’s TankerKleen business.

The event will be from 6 to 8 p.m. July 16 at The Outlet. The first hour will be dedicated to acquiring knowledge and insight about entrepreneurship; the second half of the evening is reserved for networking and conversation. Interested individuals are welcome to come for the entirety or either part of the event.

ALEAP learning and networking sessions will be at The Outlet on the third Thursday of each month. Upcoming dates are as follows: July 16; Aug. 20; Sept. 17 and Oct. 15.

More information about the ALEAP community initiative can be obtained by contacting the Albert Lea Economic Development Agency at 507-373-3930.

Lynne and Murray at The Outlet also welcome inquiries about the monthly ALEAP events and collaborative workspace availability. They may be contacted by phone at 507-383-7200 or via email at info@themarketingplant.com.

Rebecca Rowe is a community economic development intern with the City of Albert Lea. She is a graduate student at the London School of Economics in England.