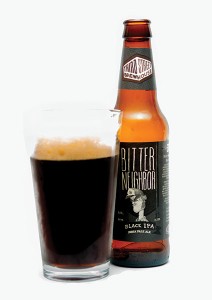 With that being said, I figured my chances of liking Third Street Brewhouse’s Bitter Neighbor black IPA would be about 50-50. In the end, my impression was right about in the middle, too. I didn’t absolutely love it but I didn’t absolutely hate it, either.

Pouring Bitter Neighbor into a pint glass, it does stick to the glass pretty nicely, and the head is pretty minimal. Obviously it’s a pretty dark beer, almost black.

You can definitely smell the malts with this beer, and I smelled a bit of coffee and cocoa aromas, as well. To me, it smelled nothing like an IPA, which worried me a bit.

As far as taste goes, this ale has to be one of the most difficult for me to describe. Overall I think it had a decent flavor and was very smooth. The taste seemed to differ between toasted malts, caramel, toffee, molasses and dark cherry licorice. To me it was like the beer couldn’t land on one flavor palette.

It did have a slight, earthy bitterness that I enjoyed, but not enough of one if it’s going to call itself an IPA, and especially not if it’s called Bitter Neighbor, in my opinion.

The feel of the black IPA was a bit flat to me, and seemed like it could’ve used a bit more carbonation.

This is in no way an IPA to me. The hop aromas and flavors are too lacking to be an IPA or even a black pale ale, for that matter.

In general, I consider myself a fan of Third Street. The brewery, which is based out of Cold Spring, has a number of decent beers that are more aptly named and better represent their products than Bitter Neighbor does.

I didn’t mind the “black IPA’s” taste and thought it was drinkable, but I don’t see myself spending any more money on it in the future.