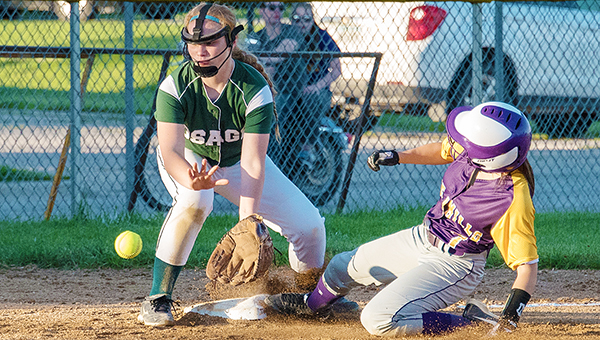 Against the No. 2 team in the North Iowa Conference standings, the Lake Mills softball team snapped its longest skid of the season.

Hailey Borgmeyer took the win from the pitching circle, drove in a team-high two runs and tied Emily Orban with a team-high three hits to lead the Bulldogs past Osage 7-6 in Game 2 after a 10-3 loss in Game 1 Monday at Lake Mills. 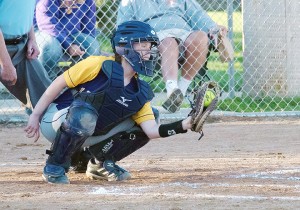 Amelia Evenson of Lake Mills catches a pitch Monday against Osage. Along with playing behind the plate, Evenson had a hit and an RBI in Game 1 of the doubleheader. — Lory Groe/For the Albert Lea Tribune

The Bulldogs (6-9 overall) lost four of their first five games, won four of their next five and headed into Game 2 of the doubleheader with Osage on a four-game losing streak.

O’Malley, a sophomore, had the second-best earned-run average in the NIC through nine games.

Osage (8-3 overall) led 6-5 headed into the seventh inning, but a pair of runs in the seventh propelled the Bulldogs to the win.

Emily Orban took the loss from the pitching circle with two strikeouts and a walk. Orban has a 4-9 record on the season and has the Bulldogs’ best ERA at 4.93.

Through 13 games, five Lake Mills batters averaged over .300. Sophomore Robyn Bowman led the team with an average of .400, and sophomore Jewell Gasteiger has a team-high 15 hits.

Next, the Bulldogs will host a doubleheader against Bishop Garrigan at 6 p.m. Wednesday.