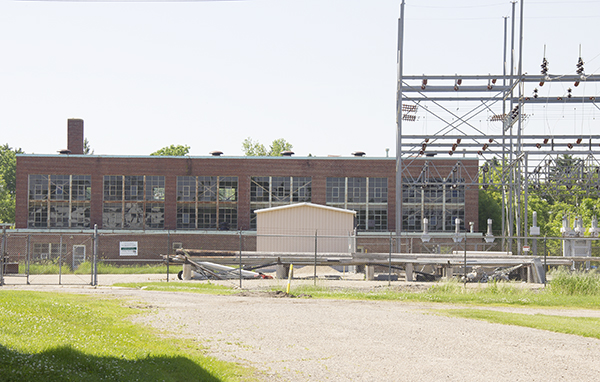 The Minnesota Pollution Control Agency removed about five pounds of mercury from this building in Twin Lakes after a reported mercury and diesel fuel spill. – Sarah Stultz/Albert Lea Tribune

TWIN LAKES — Tests conducted thus far on the drinking water in Twin Lakes have come back with no contamination for mercury or diesel fuel, according to the Minnesota Pollution Control Agency.

The results came Thursday after Freeborn County and Minnesota authorities received a report of a diesel fuel spill and mercury found on May 26 at a former Dairyland Power building at 508 Depot St.

The MPCA sampled three wells — two that were onsite and one for the city water supply.

The mayor said though he was concerned when the initial report came in, he was not too nervous because the city’s well is tested frequently.

“If something bad would have showed up in there we would have been on it anyway,” he said.

Freeborn County Sheriff Kurt Freitag said the Sheriff’s Office and MPCA coordinated cleanup of about five pounds of mercury from the building.

Mike Rose, with the MPCA emergency response unit, said his agency was at the site again Thursday pulling up tiles from an office that read high for mercury contamination. They are also coming up with a plan to pump several feet of water and diesel fuel out of the basement of the building.

Rose said his agency conducted ambient air monitoring in the building and sampled the three wells because the onsite wells draw from the same aquifer that the municipal well draws from. The tests came back that the water is safe to drink and had no contamination of diesel fuel or mercury, and they are waiting on some results back from a water sample in the basement.

He said he was pleased with the work completed thus far and the rate at which it has been done. He said it would not be uncommon to find mercury in an old power plant because it could have been used in control panels or other duties there. He noted that mercury left undisturbed usually isn’t that great of a risk, but the threat of mercury comes in the inhalation of vapors.

Mercury and its compounds are highly toxic and can lead to serious health problems, including with the nervous, digestive and immune systems and with lungs, kidneys, skin and eyes, according to the World Health Organization.

As cleanup continues at the site, questions remain about the ownership of the building.

Questions remain, however, because the deed still lists ownership to Dairyland Power, and Mike Klukow and his father have since died.

Freitag said concerns were brought to light on May 26, when Klukow’s son went into the building to retrieve some of his father’s belongings. He found a bottle of mercury and diesel fuel spilled in the basement with about three feet of water. He called the Minnesota state duty officer, who contacted the Sheriff’s Office, who in turn contacted the MPCA.

Freitag said the building is in rough shape with a lot of garbage.

He said it appears the Klukows used the building for maintenance on vehicles, including for oil changes.

Freeborn County Attorney Craig Nelson said liability for the building could still belong to Dairyland as the deed to the Klukows was never recorded.

The cleanup itself is expected to cost more than $15,000 for the mercury and at least $30,000 for the wastewater and diesel fuel, Rose said.

“It’s going to be an expensive cleanup,” Rose said.

Twin Lakes resident Dan Tuttle said he lives about a quarter of a mile away from the former power plant and goes for a walk nearby every day.

He said at one point he had considered purchasing the building from Klukow for storage, and he is glad now that he didn’t end up buying it.

“I was surprised and not surprised to hear the news,” Tuttle said.