Eddie Cochran was born in Albert Lea in 1938 and became a famous rock and roll artists before his untimely death. Cochran died in a car crash in England in 1960. 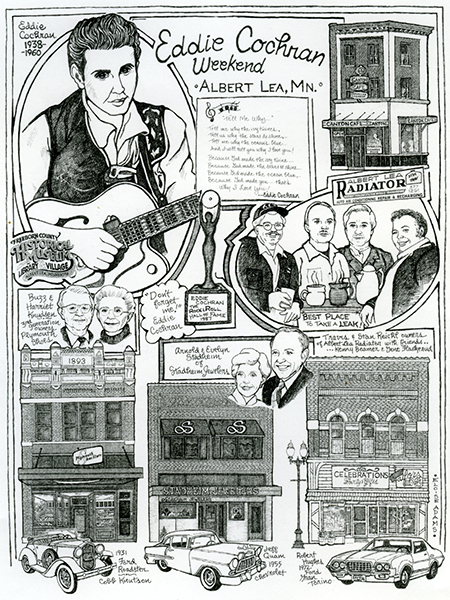 With the picture of Eddie and his prized guitar are the lyrics to one of Eddie’s songs, “Tell Me Why.” Eddie was inducted into the Rock ‘N Roll Hall of Fame in 1987. He always signed “Don’t forget me!” with his autograph. His mother said that Eddie called his guitar his best friend.

Also shown in the upper right is the Canton Cafe, 321 S. Broadway. In the 1960s it was well known for Chinese and American food.

The middle right shows Travis Reichl with his dad Stan Reichl, owners of Albert Lea Radiator, 214 Elizabeth Ave. This is where people came to have their cars taken care of, but they were told not to drink the coffee when Stan was there. It was rumored that he never washed his coffee pot. Shown with the Reichls are friends Kenny Beamer and Gene Flaskerud.

Below are three historic buildings and businesses on Broadway where the car show is held. To the left is Plymoth Shoes which has been a part of Albert lea for 125 years. Also shown are third generation owners Buzz and Harriet Knudsen.

Center is Stadheim Jewelers which has been part of Albert Lea for 62 years. Shown are Arnold and Evelyn Stadheim who started the business.

To the right is the Celebrations Party and Gift Store owned by Tamie and Tom Staker for six years. The business is located in the basement of Albert Lea Tailors which was started by Ann Oberg 35 years ago. Adele Hellecksen owns the business now, but Ann continued to work there for Adele for many years.

The cars pictured from right to left are a 1931 Ford Roadster owned by Cobb Knutson; a 1955 Chevrolet owned by Jeff Quam; and a 1972 Ford Gran Torino owned by Robert Hughes.

Original drawings can be seen at the Freeborn County Museum.

The prints are numbered and signed. They can be seen at Adams’ Originals, 238 S. Broadway and at 6 p.m. at the Friday night Cruise-In Social at the Country Inn and Suites.