Eddie Cochran show draws car enthusiasts from all around

The 29th annual Eddie Cochran Weekend in Albert Lea will be downtown this summer for the second year in a row.

The weekend kicks off at 6 p.m. Friday with a cruise-in social in the parking lots of Green Mill and Country Inn & Suites. 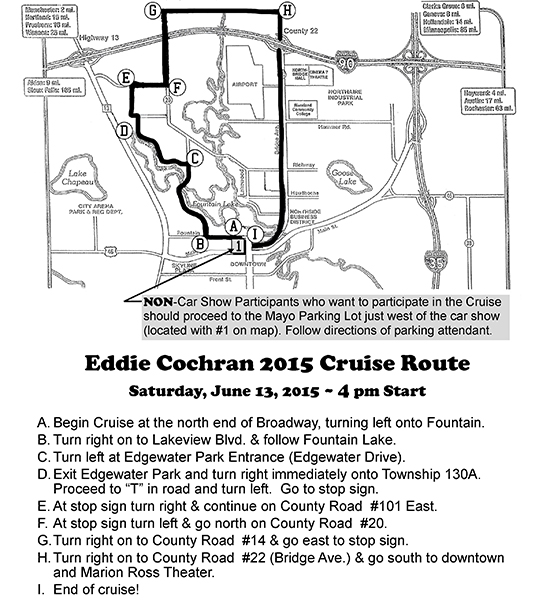 Power 96 radio will air live from the social, and Green Mill will have food available for purchase inside and outside of the restaurant. The Freeborn County Historical Museum will also have root beer floats for sale, and three awards will be given out.

The next day, events start early with registration for the downtown car show from 8 to 11 a.m. Cost is $10 for the registration of each car and driver, which includes a goodie bag and dash plaque. It is free for the public to attend.

Awards will be given out at 2 p.m., and the 12-mile cruise will begin on North Broadway at 4 p.m.

It will follow the same route as previous years.

Pat Mulso, executive director of the museum, said there will be numerous awards given out, including a mayor’s choice and other awards from the museum, the Albert Lea Convention and Visitors Bureau and Riverland Community College. The top five cars will be selected by the spectators.

She said new this year there will be a special class for 1955 through 1957 stock or street race cars.

“It’s a great family event,” Mulso said. “You can come and spend as long or as little time as you like. If you enjoy looking at cars, the owners will be there to talk with you.”

The museum’s exhibits of Eddie Cochran and Marion Ross will be open from 10 a.m. to 4 p.m., with a shuttle available between downtown and the museum.

In addition, Mulso said there will be a window-decorating contest for downtown businesses. The theme this year is the 1950s, and the windows were available for viewing by Monday morning.

“This is a great way to celebrate someone who grew up here in Albert Lea and also to enjoy the summertime,” she said.

The weekend celebration is in honor of Albert Lea native Eddie Cochran. Cochran was born Oct. 3, 1938, in Albert Lea. He started playing guitar when he was 12 years old, and when he was 14, he and his family moved to California.

He dropped out of Bell Gardens High School and toured as a country music performer in California. He switched to rock in 1957 with “Sitting on the Balcony.” Other hits of his include “Summertime Blues,” “C’mon Everybody,” “Something Else” and “Jeannie, Jeannie, Jeannie.”

Cochran died in 1960 when the cab taking him to Heathrow Airport was speeding, blew a tire and crashed into a pole.

The same night as the Eddie Cochran show on Saturday, there will be a UV Splash Color Dash 5k hosted by the Rotary Club of Albert Lea.

The 5k begins at 10 p.m. in the North Broadway parking lot. Registration starts at $35. Proceeds will benefit the Rotary Club of Albert Lea and Halverson Elementary School. To register go to www.uvsplashcolordash.