Editorial: Be smart during rain, flooding 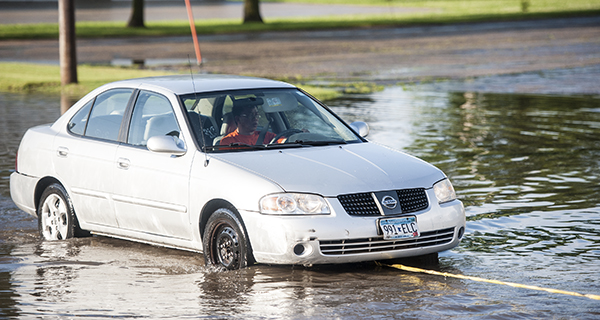 We’ll hear calls over the police scanner about drivers trying to power through standing water, getting stuck and needing to be rescued.

While you would think this would be an issue that common sense would resolve, it’s something that keeps happening time and time again in Albert Lea and most towns.

Be smart and safe: When there’s even a shred of doubt, take a different route. It’s not worth the risk and cost.

What to do in a flash flood

Flash floods occur within six hours of the beginning of heavy rainfall. Below are some guidelines from the National Weather Service for keeping safe during a flash flood:

• Be prepared to evacuate and go to high ground immediately.

• Get out of areas subject to flooding, such as low spots, canyons, washes, etc.

• Do not attempt to cross a flowing stream on foot. Even water only six inches deep, when moving at a high rate of speed, can knock you off your feet.

• Never drive through flooded areas or standing water. Shallow, swiftly flowing water can wash a car from a roadway. Also, the roadbed may not be intact under the water.

• If the vehicle stalls, abandon it immediately and seek higher ground. Rapidly rising water may engulf the vehicle and its occupants.

• Be especially cautious at night when it’s harder to recognize flood dangers.

• Do not camp or park your vehicle along streams and washes, particularly during threatening conditions.

• Six inches of water will reach the bottom of most passenger cars causing loss of control and possible stalling.

• A foot of water will float many vehicles.

• Two feet of rushing water can carry away most vehicles. including sport utility vehicles and pickups.