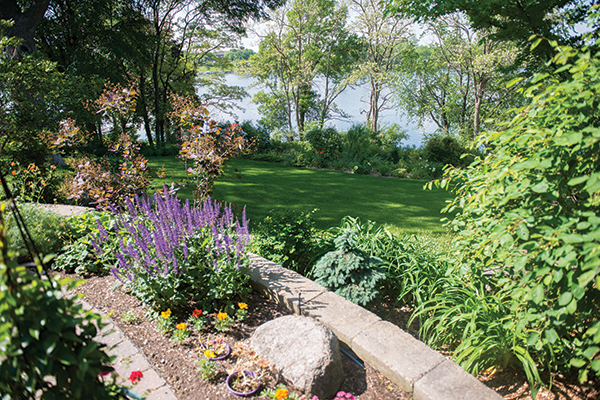 Len and Joanne Shelhamer’s home at 201 South Lane overlooks Fountain Lake. The Shelhamers said they moved into their home about 25 years ago. – Colleen Harrison/Albert Lea Tribune

With multiple lakes in the area, Albert Lea is home to numerous lakefront properties.

These properties provide prime spots to relax, sit and read a book or entertain — all while taking in spectacular views.

We interviewed three lakefront property owners about what they have done to update their yards and their favorite things to do in their outdoor spaces.

Much has changed for Len and Joanne Shelhamer’s backyard at 201 South Lane that overlooks Albert Lea’s Fountain Lake since the couple moved in about 25 years ago.

When they bought the home, Joanne said there was a deck that spanned the back of the house.

After building a new deck, they decided it was too much to maintain, so they constructed a tumbled-stone patio about 10 years ago.

The patio features a table set with an umbrella, a grill and a fire pit, to name a few.

The couple said they enjoy having family and friends over to their home and they also enjoy sitting out and reading a book or lounging about.

“We love to entertain,” Joanne said. “We eat out here, too, on a nice night in the summer.”

Throughout the yard and surrounding the patio are multiple types of perennials and annuals, including everything from salvia, geum, peonies, bergenia and hostas. A climbing rose is the feature on one side over an arch.

Beneath the patio is a sloped yard and then more flowerbeds, which feature more perennials and other plants, such as sumac and daylilies and other shrubs and flowers.

They said they have lost some trees over the years, so they have had to replant some. The yard provides privacy, yet they can still see people walking past on Lakeshore Drive and other boaters in the area.

They said the slope of their yard has been a challenge and they have had to make sure to plant things that aren’t going to get washed out in the case of rain.

Len is a physician at Mayo Clinic Health System in Albert Lea, and Joanne is the former owner of Best Buy Paper, now known as Celebrations Party & Gifts.

Chris and Dan Donovan began a remodel of their property in 2003 but about four years ago commissioned Kenneth Schulte, who used to work for Wedge Nursery, to install new landscaping and an 18-foot round paver patio with a fire pit in the middle.

Schulte said there’s everything from hostas to columbine to ajuga, to name a few, along with birch trees and lilacs that were already in the yard.

Next to the patio is a pondless waterfall, and numerous glass and wood sculptures have been placed throughout the area.

Chris said they have had many outdoor movie nights on the patio, in which they invite friends and even neighbors to attend.

They have lived in the house for about 30 years, and over the years many trees have been taken out.

“There was a point when you couldn’t see the road from the deck,” she said about the number of trees. A deck covers the back of a majority of the house.

Chris works at Alliance Benefit Group, and Dan owns Donovan Dealer Services and is self-employed at auto dealers in town. Dan has one adult daughter, and Chris has two adult children.

Bob and Krista Steffl bought their house on Bay Oaks Drive in Albert Lea in September 2003 and have since turned their back yard into a simple but classy space on Fountain Lake’s Edgewater Bay.

Among many improvements, they have installed a spiral staircase from the top level of their house outdoors to the lower level.

Once on the ground, they changed what used to be just a grassy slope into different tiers — one for a seating area and one for a play area. The yard is highlighted with perennials.

In the play area they installed a Rainbow Play System playground for their two children, Jenna and Kyle, that is enclosed by a black iron gate.

Closer to the lake is a hammock Bob received as a Father’s Day gift several years ago, which allows them to relax near the lake.

Directly across from the new Edgewater Park pavilion, the family can watch Bayside ski shows from their home. 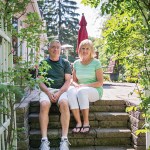 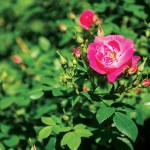 A climbing rose has wound itself around a trellis in the Shelhamer’s yard. – Colleen Harrison/Albert Lea Tribune 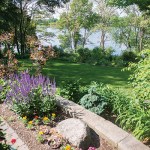 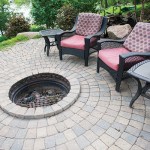 With the help of Kenneth Schulte, the Donovans have had quite a bit of work done to change the look of their backyard, including putting in a round paver patio. -Colleen Harrison/Albert Lea Tribune 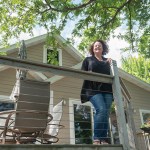 Chris Donovan said she and her husband, Dan Donovan, like to entertain in their backyard. – Colleen Harrison/Albert Lea Tribune 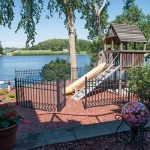 Since moving into their house in 2003, the Steffls have redone their backyard. This included putting in a playground and play area for their children. – Colleen Harrison/Albert Lea Tribune 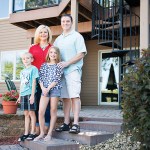