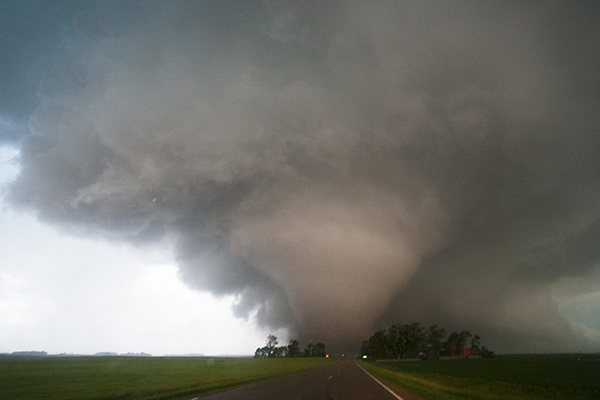 A tornado moves across the rural Conger countryside on June 17, 2010. This image was taken from Freeborn County Road 4 one mile south of the farm of Jeff and Beth Zeller. — Photo courtesy Benjamin and Michael Tillotson/TCS.net

Freeborn County tornado survivors describe how lives have changed since horror of June 17, 2010

It has been five years since tornadoes struck Freeborn County, and survivors remember the night like it just happened yesterday.

As they recall the events that took place on June 17, 2010, and in the years since, they said they are grateful for their family, friends and the community who have helped them rebuild their lives.

“I didn’t want to be defined by the fact that we had been hit by a tornado, but it changed who we are,” said one survivor, Beth Zeller, whose home at 18681 650th Ave., northwest of Conger, was badly damaged that night.

Tornadoes touched down 20 to 25 separate times in Freeborn County from three cells the night of June 17, 2010.

The storms hit the county starting in the southwest and extending to the northeast. At least one storm weather cell was out of Kiester, a second one started west of Manchester and a third one started in the Hollandale area.

One woman, Kathy Woodside, 67, died from injuries she sustained from a tornado northwest of Armstrong, others were injured and dozens of people’s homes and buildings were destroyed.

Beth Zeller and her husband, Jeff, said they were not home when a tornado hit their home, machine sheds, cattle sheds and hog barns, but they arrived home later that evening.

Jeff Zeller said he was driving a truck for Minnesota Corrugated Box in Mason City and Beth was babysitting their grandson in Des Moines when a tornado hit their property.

He said he knew there was going to be bad weather in the area and had been listening to the radio about it.

About 15 minutes later, he said he started receiving phone calls, and one from his neighbor told him he needed to come home right away.

When he arrived home about 45 minutes later, he said he found his home badly damaged. Their garage was gone, along with a portion of the roof, and the windows had been blown out. The house, which was only about 20 years old, sustained major water and storm damage as well on the interior.

He said their hog barns — which at the time housed about 1,500 pigs — were badly damaged, and 18 pigs died.

One machine shed was completely gone, and their grain bins were smashed. Many of their trees, which they had planted about 20 years earlier, were also destroyed.

“There was nothing on the place that wasn’t damaged in one shape or form,” Beth Zeller said.

She said when she arrived at the house a few hours later, it was already dark. She could see that there were trees down, their garage was gone and bins were smashed.

“Everything just looked so surreal,” she said. “It was crazy.”

The Zellers said they actually tried sleeping in their home that night but were unable to get much sleep. At about 6 a.m. June 18, people started showing up to their house asking what they could do to help.

Jeff Zeller said through the tragedy, he saw the community at its best. Many people came to help and a neighbor helped replant some of his beans.

One of their major concerns at the time was the upcoming harvest.

They had their new sheds built and grain bins up in time to handle the harvest.

“Everybody was incredibly helpful,” he said.

They moved into their new home Dec. 23 of that year.

The couple said they learned many lessons from their experiences.

Jeff Zeller said they saw a change in their attitudes and they strive to no longer worry about the small things in life. Beth Zeller has documented the events through scrapbooking and writing, and they are more cognizant of the weather than they used to be.

They said they were fortunate to be gone when the tornado hit their property.

“We didn’t have the trauma a lot of people did,” Jeff Zeller said.

Losing a loved one

Similar to the Zellers, Ron Woodside, who lives northwest of Armstrong, said he and his wife, Kathy, had also heard that bad weather was coming the night of June 17, 2010, and that they should watch out for it.

He said they had the car running and were going to drive to safety in case they saw a tornado coming. He saw a dark cloud coming from the south that Ron said looked like a bad rain cloud, but little did they know that inside that cloud was a tornado.

“It started pitter-pattering on the kitchen window, and then walls started to move,” he said.

He said both he and and his wife, who had been married for 19 years, were knocked flat off their feet, and then the tornado took the house.

As their belongings were destroyed around them, they were carried to the north ditch across the gravel road in front of their home, where they were found next to each other by responders.

Ron Woodside suffered from 19 broken ribs, broken collarbones and shoulder blades, a dislocated elbow and rotator cuff damage in one arm. One leg also had nerve and tendon damage. Kathy’s leg was severed and she did not make it to the hospital.

Ron Woodside said he remembers waking up in St. Marys Hospital. After about a week he found out about his wife’s death.

Five weeks later, he was released from the hospital to the transitional care unit of Good Samaritan Society of Albert Lea, where he underwent rehabilitation and learned how to walk again.

It was there, he said, that he made peace with God.

He moved into his new home, a prefabricated house, in November 2010, where he has been ever since.

He said he will likely visit Kathy’s gravesite today at Hillcrest Cemetery, but for the most part he tries to live his life without dwelling on what he experienced.

“I’ve always had the idea that life is for the living,” he said. “There’s no use brooding about something you can’t do anything about.” 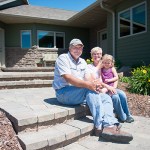 Jeff and Beth Zeller, pictured with their granddaughter Bethany, had their home and much of their family farm south of Alden damaged during the June 2010 tornado. -Colleen Harrison/Albert Lea Tribune 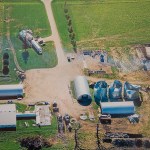 An aerial view of damage done by a 2010 tornado to the Zeller family farm. – Provided 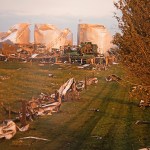 Much of the Zeller family’s farming equipment and structures had to be replaced or completely rebuilt after the 2010 tornado. – Provided 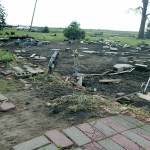 Other than a few pieces of the steel frame that were thrown as far as 200 or 300 yards away, this is all that remained after an EF4 tornado ripped through the home of Ron and Kathy Woodside, near Armstrong on June 17, 2010. – Sarah Stultz/Albert Lea Tribune 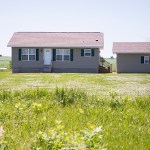 After the Woodsides’ home was destroyed in the 2010 tornado, a house has since been built on the property where Ron Woodside still lives today. – Colleen Harrison/Albert Lea Tribune 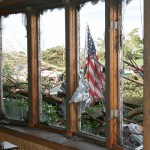 The flag remains standing outside of the home of Matt and Randie Luna the morning after the June 17, 2010, tornadoes. – Sarah Stultz/Albert Lea Tribune 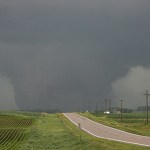 A large funnel cloud touches down west of Albert Lea the evening of June 17, 2010. The tornado was traveling northeast. Several tornadoes were reported in southern Minnesota and northern Iowa that evening, some causing major damage. – Arian Schuessler/Mason City Globe Gazette 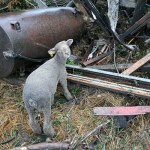 A sheep on the Gordon Toenges farm looks for help June 17, 2010, after a tornado destroyed the barn. All the other sheep remained in the concrete walls that were part of the barn foundation. The rest of the barn was blown away. – Tim Engstrom/Albert Lea Tribune 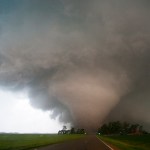 A tornado moves across the rural Conger countryside on June 17, 2010. This image was shot from Freeborn County Road 17 generally west of this tornado, which was increasing to EF4 strength at this point. In this image it was directly over the farm of Jeff and Beth Zeller. – – Photo courtesy Benjamin and Michael Tillotson/TCS.net