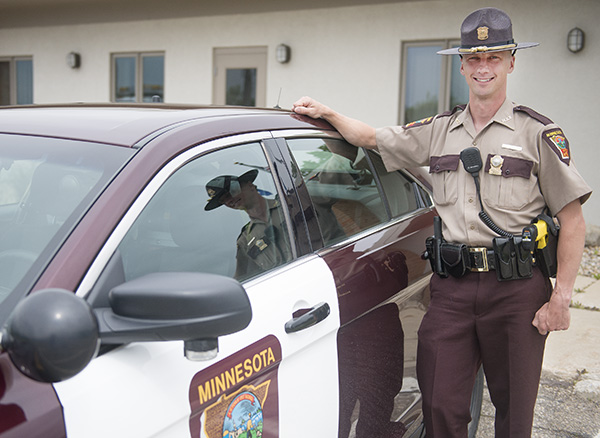 One Albert Lea native has reached his lifelong goal of becoming a Minnesota State Patrol trooper.

The son of Mark and Linda Hoffman, David Hoffman was born and raised in Albert Lea and graduated from Albert Lea High School in 1998.

He was part of the Minnesota National Guard unit in Albert Lea from 1997 to 2003 and said he decided he wanted to be in law enforcement as a junior in high school when he got the opportunity to ride along with Officer Bill Villarreal who was the liaison officer at the time.

He attended Alexandria Technical College and earned his associate’s degree in law enforcement, after which he worked as a private investigator in Naperville, Illinois.

“He always wanted to do his best in his work performance,” Freitag said. “He was very punctual, and he brought insightfulness that’s always useful for law enforcement.”

Freitag said he was not surprised Hoffman did well at the State Patrol academy.

Hoffman said it has always been his goal to work for the Minnesota State Patrol.

“I like the fact that I can work for a big department but still live locally,” he said. “There’s a lot of different opportunities to specialize.”

After 16 weeks of training in everything from classroom work and an emergency vehicle operator’s course to use of force training, to name a few,  he graduated May 19 from the Minnesota State Patrol Training Academy at Mariucci Arena at the University of Minnesota.

A State Patrol news release stated the cadets worked 15 hours a day during the training period and demonstrated “mental and physical toughness.”

Hoffman called the academy a stressful time — even more stressful than basic training for the Army.

“I’m very proud of what I’ve accomplished and done so far,” he said.

Col. Matt Langer, chief of the Minnesota State Patrol, applauded the graduates in a news release sent out last month.

“The hard work and dedication the cadets put in during the academy is beyond measure,” Langer said.

Hoffman said the new troopers will serve all over the state. He initially thought he would serve in the Worthington area, but a vacancy came open at the last minute in the Albert Lea area, and he was able to transfer back.

He will cover Freeborn and Mower counties.

Though he has graduated from the academy, he now has to go through field officer training where he rides with a senior officer for more hands-on training. This continues through the summer, and on Aug. 12, he will have his first day by himself on patrol.

Hoffman and his wife, Nicole, have two children, Autumn, 5, and Alexander, 2.

When he is not working, he said he enjoys spending time with his family, golfing and kayaking.

He noted that the State Patrol is looking for additional troopers, and people can apply through www.mntrooper.com by June 16. He said anyone with a two- or four-year degree can become a trooper, even if that degree was not in law enforcement.