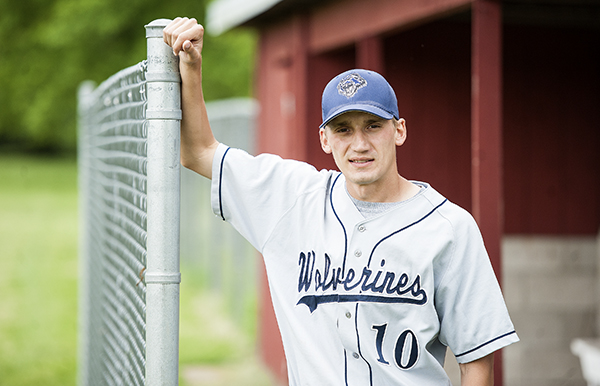 Lucas Knutson leans on the fence in front of a dugout on May 29 at the Glenville-Emmons baseball field. Knutson is the Wolverines’ JV baseball head coach. -Micah Bader/Albert Lea Tribune

GLENVILLE — The end of the school year was far from the conclusion of baseball season for Lucas Knutson.

After coaching Glenville-Emmons’ JV baseball team this spring, Knutson will stay on the diamond this summer as the coach of Heron Lake-Okabena’s Post 608 Legion baseball team, as a player for the Heron Lake Lakers amateur baseball team and as the director of youth baseball for Heron Lake’s summer recreation program.

“Almost every day I’m on a baseball field either coaching or playing,” Knutson said. “It’s kind of like the old saying that you eat, sleep and breathe baseball.”

“He’s done a great job of talking with the kids encouraging them to participate in activities,” said Rayman. “He’s also been a good promoter of the school. If there’s something that needs to be done, he’s more than helpful.” 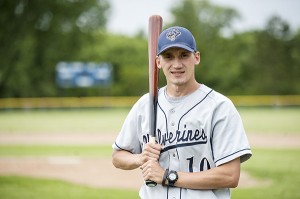 Lucas Knutson holds a bat on May 29 at the Glenville-Emmons baseball field. Knutson played baseball at the high school and collegiate levels. – Micah Bader/Albert Lea Tribune

Along with an 11-10 win over Alden-Conger’s JV team, the Wolverines showed strides in Knutson’s second season as head coach during two matchups against Randolph: Glenville-Emmons lost 21-2 in five innings on April 14 but narrowed the margin to three runs on May 19 in a 9-6 loss.

“After the (second) game, we got some compliments from the Randolph coaches and players about how much they thought we improved,” Knutson said. “That was nice to hear. We stuck in there and competed.”

Knutson, who is in his second year of teaching health and physical education at Glenville-Emmons, followed the footsteps of his father, Les Knutson. His father retired two years ago after instructing social studies and physical education for 38 years at Heron Lake-Okabena, formerly known as Southwest Star Concept, Knutson said. His father was also the school’s head girls’ basketball coach for 34 years.

“He inspired me to become a teacher, and I’d always be tagging along to his games,” Knutson said. “Teaching and coaching are things that best fit my personality, and it’s what I like to do.”

Knutson graduated from Heron Lake-Okabena when it was called Southwest Star Concept in 2005, and he participated in cross country, basketball, baseball and track. Since baseball and track are both spring sports, Knutson said on occasion he’d play in a baseball game and go to the track later in the day to compete in the distance events.

At Minnesota West Technical and Community College in Worthington, Knutson played baseball for two years and was the Bluejay’s starting second baseman as a sophomore before he finished his schooling at Southwest Minnesota State University in Marshall.

Despite living in Minnesota, Knutson is a Chicago Cubs fan.

“My older brothers were always watching them, and their games were on WGN almost every day,” Knutson said.

Next spring, Knutson said he aims to field a varsity baseball team at Glenville-Emmons.

“We should have everyone back, and there was a strong core of sophomores,” he said. “It’s all about getting them experience, playing time and confidence so we can build this thing.”

Interesting fact: Knutson worked as a part-time sports writer for the Worthington Daily Globe for about nine years.