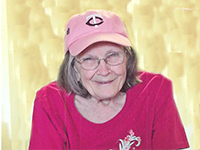 Helen was born July 31, 1925, in Minneapolis to Harry and Josephine Fernelius. She graduated from Albert Lea High School in 1943 and married Raymond F. Weik in 1944.

Helen worked on the machine floor of American Gas Machine Co. during World War II, then as a bookkeeper for the Freeborn County engineer’s office for seven years, Albert Lea Tool and Gordon Electric for 13 years and Naeve Hospital for 26 years. She enjoyed sewing for children and grandchildren and painting and decorating the houses her husband built. Other interests included rollerblading at age 70, league bowling — especially the senior league turkey hugs — square dancing and reading. An avid Twins fan, she seldom missed watching a game on TV and glowed when recalling her trip to see the new stadium.

As the matriarch of her family, she was deeply admired by many, had a grateful heart and brought out the best in those around her. She inspired others to see the best in every situation and to take opportunities to experience all that life has to offer.

Helen was preceded in death by her parents; her sister, Gladys; her brothers Donald and Gordon; and her husband, Ray.

She appreciated the loving care she received from both hospice and Bancroft Creek Estates staff.

In lieu of flowers the family requests that donations be made to the ALS Association, Mayo Clinic Hospice or to the donor’s choice.