Ione Stern, 92, of Wells died Wednesday, June 17, 2015, at Parkview Care Center in Wells. A memorial service will be at 10:30 a.m. Saturday at Good Shepherd Lutheran Church in Wells, with the Rev. Mary Iverson officiating. Visitation will be from 6 to 8 p.m. Friday at Bruss-Heitner Funeral Home in Wells. Visitation will continue one hour prior to the service at the church on Saturday. Interment will be in Rosehill Cemetery in Wells. Bruss-Heitner Funeral Home of Wells is in charge of arrangements. Please see www.brussheitner.com to leave online condolences. 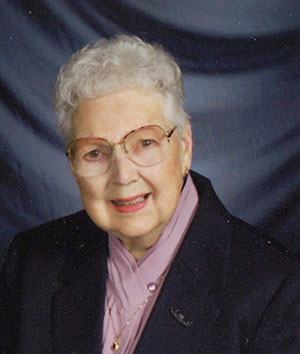 Ione Jean Stern was born July 12, 1922, in Minneapolis, the daughter of Harold and Jennie (Johnson) Tonn. She moved to Walters at a young age and graduated from Kiester High School in 1941. She worked for Hattie’s Grocery Store and also cleaned houses for a period of time. On Oct. 7, 1943, she was united in marriage to Willard Stern in Walters. They resided on the Stern century farm until 1989 when the couple moved into Wells. Ione loved traveling, geography and going south for the winter. In her later years she enjoyed traveling with her daughters. Ione loved baking and sewing, she belonged to a 500 card club and read murder mysteries. She was a faithful member of Good Shepherd Lutheran Church where she was very active in quilting circles and Bible study. Ione had a deep love for her family.

She is preceded in death by her parents; husband, Willard; and great-great-grandson, Austin.