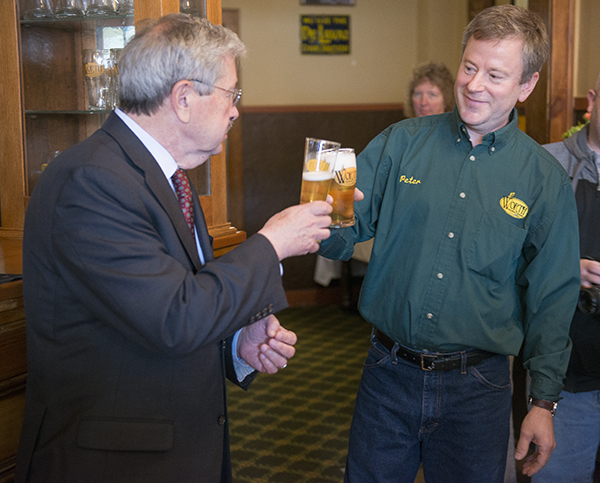 NORTHWOOD — Iowa Gov. Terry Branstad congratulated Northwood’s Worth Brewing Co. as its owners on Friday announced plans for a major expansion across the street from their present location on Central Avenue.

The expansion, which is slated for completion in early 2016, will increase brewery space by about five times and production capacity by about 30 times. It will also include a new tap room and a large space for events.

“This is a growing entrepreneurial business and an opportunity to meet the needs of Iowa,” Branstad said. 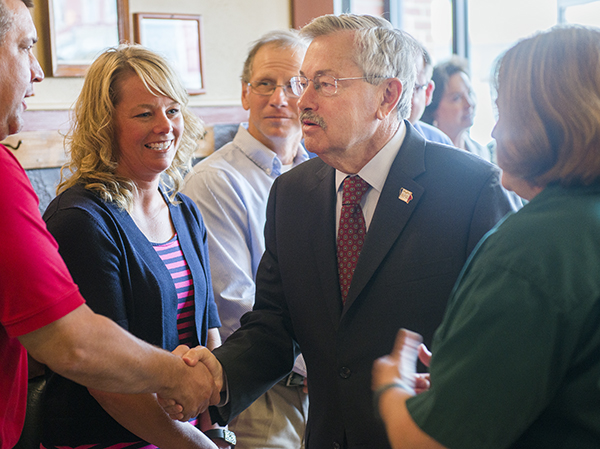 Gov. Terry Branstad greets those in attendance as he arrives at Worth Brewing Co. Friday in Northwood. The governor toured the expanding brewery to call attention to small business growth and reinvestment in Iowa, according to a press release. – Colleen Harrison/Albert Lea Tribune

Worth Brewing Co., which opened its doors in 2007 on Northwood’s Central Avenue, is the smallest commercial brewery in Iowa. The business was founded by the husband-and-wife-team of Peter Ausenhus and Margaret Bishop.

Ausenhus said when they opened in 2007 there were only about seven to 10 breweries in the state. Now there are about 55.

Ausenhus, an award-winning brewer and national beer judge, started the brewery in a former bank building with equipment capable of producing only a fraction of the annual volume that most breweries could produce. The brewery’s craft beers quickly developed a following in Northwood and in the surrounding communities in northern Iowa and southern Minnesota. Worth Brewing Co. presently serves five beers year-round, plus one new one each month.

He said they have brewed 2,000 batches since they opened.

As part of the expansion, Ausenhus plans to increase distribution of Worth Brewing Co. beers for wider availability at area bars and restaurants. Plans may also include expansion into bottling for retail sales.

According to a news release, the expansion is being made possible through funding from the Northwood Economic Development Corp. and other private investors.

Bishop said she and her husband have not yet decided what they will do with their old building across the street. She is hopeful someone may be interested in turning it into a coffee shop or something similar.

“Hopefully we can get another business up and running,” she said.

Mary Montgomery, a former Northwood resident who now lives in Mason City, said her children enjoy coming to Worth Brewing. She is excited about the opportunity there will be for people to have reunions and other events in the new location.

Branstad, who stopped in Cresco, Iowa, earlier in the day, said each year it is his goal to visit all 99 counties in Iowa. He said he recognizes microbreweries as a growing small business in the state and heard about the success at Worth Brewing Co.

He said he was pleased to see the support of the business at the event. 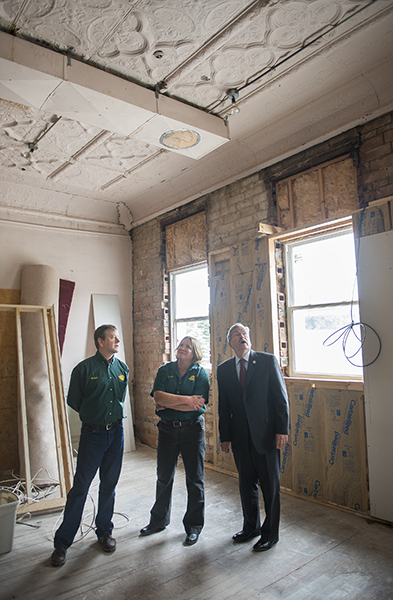 “It’s exciting to see what they’re doing here,” he said.

During his visit, Branstad tapped a ceremonial keg. He also sampled one of the company’s beer.

After his stop in Northwood, Branstad was headed to Hampton, Iowa.