Janet Clair Yokiel, 87, of Wells, died Wednesday, June 17, 2015, at her home in Wells surrounded by her family. A mass of Christian burial will be at 10:30 a.m. Monday at St. Casimir Catholic Church in Wells with the Rev. Thomas Niehaus officiating. Visitation will be from 1 to 3 p.m. Sunday at Bruss-Heitner Funeral Home in Wells and will continue one hour prior to the service at the church on Monday. Interment will be in St. Casimir Catholic Cemetery in Wells. Bruss-Heitner Funeral Home of Wells is in charge of arrangements. Please see www.brussheitner.com to leave online condolences. 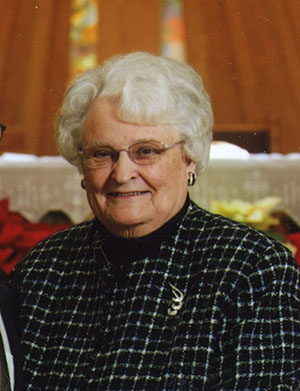 Janet C. Yokiel was born Aug. 30, 1927, in Rosemount, the daughter of Edward and Margaret (O’Rourke) Linder. Janet attended St. Mary’s Catholic School in Easton for eight years. She then attended Delavan High School, graduating in 1945. She remained at home after graduation, taking care of ill family members and neighbors throughout the mumps epidemic. She also worked for a short time in the office at Musser & Co. During the war efforts Janet worked at the hemp plant north of Wells. On Sept. 30, 1947, she was united in marriage to James Yokiel and to this union seven children were born. She belonged to three bridge clubs, a 500 club, Clarketts extension group and several neighborly clubs. Janet was a member of St. Casimir Catholic Church. She belonged to the CCW, and was president in 1974. She enjoyed her large garden, canning and flowers. She was a fantastic cook and baker, and always fed the men in the field hot delicious meals and desserts right out of her car trunk.

Janet is survived by her husband, James, of Wells; seven children, Norma (Doug) Schnoor of Orono, Joyce (Mike) Kollar of Bovey, Greg (Jean) Yokiel of Wells, Carleen (Jeff) Johnson of Owatonna, Orland Yokiel of Wells, Juanita (Larry) Stenzel of Wells and Audrey (Tim) Stenzel of Kasson; 18 grandchildren; 14 great-grandchildren with one more on the way; one sister, Evelyn Strehlo, of Wells; and two sisters-in-law, Angela Chirpich of Wells and Sister Lydia Mary of Chicago.

Due to severe family floral allergies, the family prefers memorials to the donor’s choice or to St. Casimir Catholic Church and School.