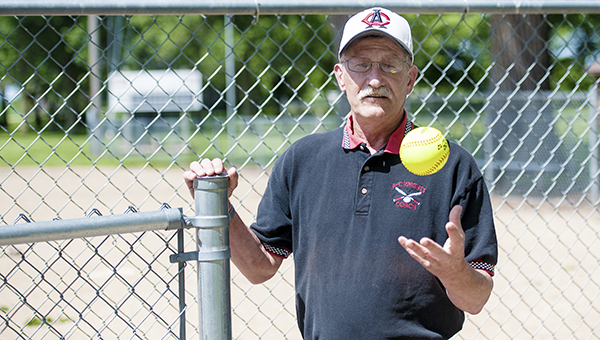 Gary Nelson stands along the fence Thursday at the Alden-Conger softball field at Alden. Nelson coached the Knights’ softball team for 28 years and retired at the end of the season. — Micah Bader/Albert Lea Tribune

After 28 years of leading Alden-Conger’s softball program, Gary Nelson retired, but his players still have an opportunity to show what they learned.

A fastpitch softball game that features the current and recent Knights against older alumni will cap Morin Lake Days at 4 p.m. Sunday at North Park in Alden.

“It’s a pleasure for me to see these kids, how they’ve grown up, what they’re doing now and that they’re still having fun playing the game,” said Nelson. 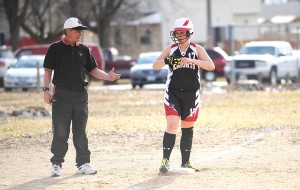 Cassie Gilster of Alden-Conger gives her batting gloves to coach Gary Nelson on April 11, 2014, against Waterville-Elysian-Morristown at Alden. After trailing 4-0 at the end of the first inning, Alden-Conger rallied to win 6-5 in eight innings. — Micah Bader/Albert Lea Tribune

Nelson took over Alden-Conger’s softball program in 1988, the first year the school transitioned from the Blackhawks to the Knights mascot. He inherited the team from former coach Vikki Pence, who was Alden-Conger’s first softball coach.

Although Nelson’s teams produced nine or more wins with four or fewer losses in three of the last four seasons, he hasn’t kept track of his career record.

“That’s for statisticians,” Nelson said. “I just worry about the next game.”

Paul Ragatz has been Alden-Conger’s athletic director since 1990, and he said Nelson excelled at building relationships with individuals on the team.

“Gary demanded the fundamentals and had the ability to produce winning teams with young players,” he said. “We’ll have big shoes to fill.”

Along with admiration of his athletic director, Nelson’s opponents also held him in high esteem.

Glenville-Emmons coach Lisa Ziebell led the Wolverines’ softball program for the last 15 years. Although Glenville-Emmons and Alden-Conger left the Gopher Conference, the teams played at least once each year during the last decade.

“When you played Alden-Conger, you always knew you were going to come up against some great hitters,” said Ziebell. “It never failed. (Nelson) is a well-respected coach, and it was always fun playing against him.”

In addition to softball, Nelson was the Knights’ football head coach for 20 years and wrestling head coach for 13 years. He also coached a few years of junior high and B squad football, he said.

“When I started playing fastpitch as a 19-year-old kid, I just fell in love with the game,” he said. “It’s just a heck of a lot of fun. We always had fun.”

“It’s great seeing the girls make plays you just didn’t think they could make,” he said.

Nelson retired after the the Knights’ season ended on May 18, but he hopes the lessons he taught impacted his players.

“The kids learn that life is a sport, too,” Nelson said. “The good comes with the bad. I always say after a loss that the sun’s going to come up in the morning.”