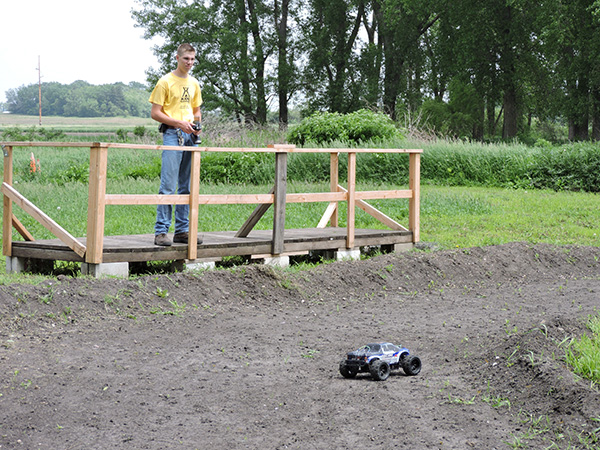 Robert Weigel, employee at the Hayward KOA Kampground, manuevers one of the remote-controlled vehicles the camp offers for rent through the newly-designed race track. – Kelly Wassenberg/Albert Lea Tribune

HAYWARD — There’s more to do at the Albert Lea/Austin Kampgrounds of America site than the name implies. Along with the traditional camping experience, visitors can lounge by the facility’s pool or tackle its newest attraction: a dirt racetrack for remote-controlled vehicles.

Camp owner Ann Hulett said the thought of installing the track came from one of her employees. Darin Hable, a Freeborn County deputy who also does maintenance work on her property, came to her with the idea over a year ago. Hulett said they have plenty of land at their disposal so she encouraged him to proceed. He’s been working on the project on and off ever since.

“It’s a track that requires some skill to get through there, especially with the gas and nitro cars. They are very finicky and you really have to know how to use them,” Hable said of the completed course, which features several sharp turns and sloped banks to help racers ease through the corners while still maintaining a higher rate of speed. The course, however, is not just for the professionals.

For those just starting with the sport, vehicles can be rented from the campground’s office. Habel said the battery-powered, four-wheel drive vehicles are entry level cars capable of going 25 to 35 miles per hour. Gas-powered vehicles, on the other hand, are capable of going speeds of up to 70 mph on a straight away.

Speed and maneuverability of any remote-controlled vehicle are dependent on a number of factors, including the skill of the driver, vehicle settings and add-ons. Those are areas Hable is quite knowledgeable in as he is a co-owner of D&CJ RC Hobbie which specializes in the sale of such vehicles.

Hable hopes to host formal races at the campsite by the end of the summer. In the meantime, he invites remote-controlled racers in the area who will come out to take a test drive on the track and offer him some feedback on how they feel he could improve upon the course. He already plans to add jumps and whoop-de-dos, which are a series of smaller hills in succession of one another, as time allows.

Those who wish to utilize the track are welcome to rent one of the camp’s remote-controlled vehicles or bring their own. Use of the track is free for campers and varies from $4 to $5 for those only interested in utilizing the race track. Anyone who owns their own vehicle will only be charged $4 while those who require a rental vehicle will pay $5 per battery charge.

Racing information will be posted as soon as it comes available on both the D&CJ R/C Hobbie Facebook page and the KOA website at www.koa.com.

To make a reservation or learn more about the Albert Lea/Austin KOA Kampgrounds facilities, including its meeting hall which can be rented for events, call 373-5170.