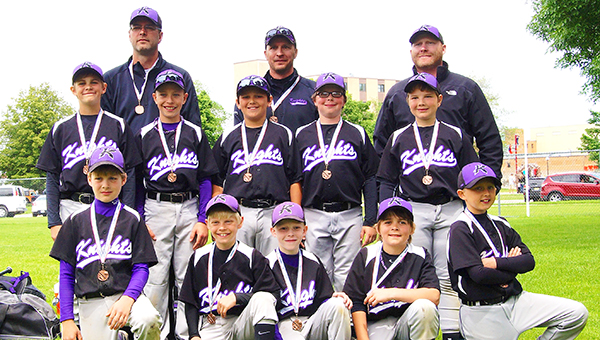 The Albert Lea Knights 10AA baseball team outlasted the Rochester Storm to take third place out of 12 teams at the Rochester American Legion Classic Tournament last Sunday, according to a press release.

After five lead changes, the Knights squeaked out an 8-6 win.

Albert Lea staved off the Rochester as the Storm wasn’t able to match the Knights down the stretch.

Rochester scored two runs in the fifth on a fielder’s choice and an RBI single. However, the Storm wasn’t able to draw even.

Blaine Bakken reached base three times for the Knights. He scored two runs and had an RBI. He doubled in the second inning and singled in the fourth.

Rochester took an early 2-0 lead in the bottom of the first. The Storm added two runs in the third and matched that in the fifth.

The Knights rallied with runs in the fourth and sixth. In the fourth, Albert Lea’s Drew Carlson scored on an error.