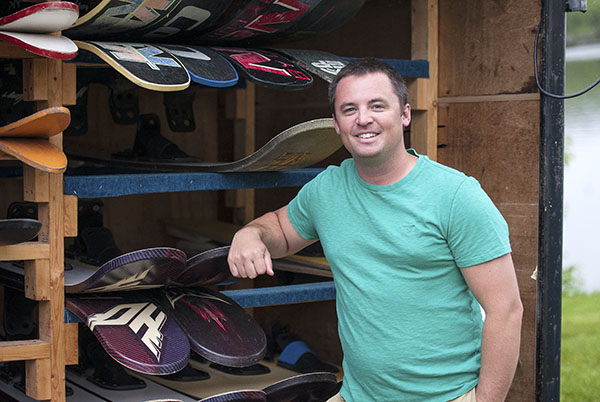 Matt Levorson, president of the Bayside Ski Team in Albert Lea, stands next to the trailer that houses supplies for the team, including skis. -Micah Bader/Albert Lea Tribune

In 1994, Matt Levorson had his first taste of waterskiing.

“I had a friend who waterskied on the (Bayside Ski Team), and I decided to give it a try,” he said. “I was hooked after that.”

For the next 20 years, Levorson skied with the team. However, for the last two years, his role changed. He became team president and decided to control the throttle instead of holding a rope.

“I needed something to reinvigorate me, and boat driving really appealed to me,” Levorson said.

The Bayside Ski Team has multiple boats, including a pair of Hydrodynes and a traditional ski boat that was purchased last year with an inboard motor.

Levorson said the best part about being part about the team for new members is being able to ski for about $150 a year.

“You can consistently ski four days a week with the club for a very nominal fee,” he said. “You can do it all summer long and have all the equipment you need.”

For new skiers, Levorson has a few lessons:

Hold onto the handle and have someone pull on the rope. Practice sitting down and standing up. It’ll help once you get to the water.

It’s there for safety. Make sure you have a life jacket.

Drive at an appropriate speed

A new skier should be pulled from 15 to 17 mph, 18 on the high end. If you go too slow, you’ll sink. If you go too fast, you’ll be out of control. You want that sweet spot where you’ve got a little bit of resistance. Your ski tips should go up, and the back of your skis down. It’s called plowing.

Your feet should be out in front of you with your knees slightly bent like you’re sitting in a chair. Push your hips toward the handle so you’re upright, and move your shoulders back to maintain a solid center of gravity.

The Bayside Ski Team has many hand signals. Thumbs up means go faster, thumbs down means go slower, tapping your head multiple times signals the driver to return to the dock and two hands crossed above your head means you or someone near you is injured.

You’ll go where you shift your weight. If you put more weight on your left foot, you tend to go left. Same concept to the right.

You’ve just got to get out and try it.

A normal week for the team includes practice on Monday, a show run-through Tuesday, practice Wednesday and a show Thursday and ocasionally Saturday.

Along with paying for USA Water Ski insurance and club dues, members are asked to volunteer time to install, remove and store docks and boat lifts to offset show production costs.

“It’s a business run by volunteers,” Levorson said. “The club gets paid, and it goes toward gas, equipment, ropes, docks and all the things that are needed to provide the free show.”

The Bayside Ski Team was founded in the 1970s by a group of skiers who put on a show during the Fourth of July.

The team will continue to perform on the Fourth of July this year. Twenty days later, the Bayside Ski Team will host the Midwest Regional Tournament.