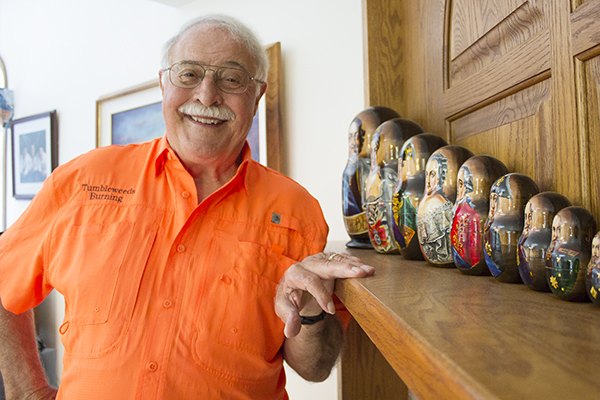 Milt Ost has released the second book in his “Tumbleweeds Burning” series, a series of historical novels about Germans from Russia. – Hannah Dillon/Albert Lea Tribune

One Albert Lean has released a second book in a historical novel series about Germans from Russia.

The historical novel focuses on the Oster family, Germans from Russia who escaped to North Dakota after being persecuted in Russia. 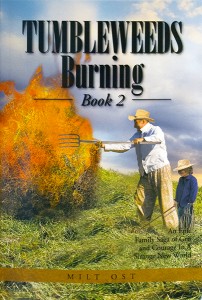 “This book is the story of the home front of the greatest generation,” Ost said, citing Tom Brokaw’s famous epithet for the generation of Americans who grew up in the Great Depression and fought in World War II.

During the time frame of the book, Ost said life was turned upside down for the Oster family, and not just because of World War II.

While the first book had the drama of the Russian royalty, Ost said the drama in the second book is much more low key. The characters are everyday people, he said, but deal with murder, witchcraft, plagues and fires.

“Some tragic stuff on how they tried to make life out of nothing,” he said.

Ost also said in some ways, life was worse in America. In Russia, Ost said people lived in villages and were used to community living. In America, people lived on farmsteads and neighbors were sparse and far away. This was especially true for the women, who stayed at home to take care of their families while their husbands went into town. And the families were usually quite large — most families ranged from six to 20 people, Ost said.

“They were virtually isolated from everybody,” Ost said.

From his first book, Ost said he had a lot of positive comments. While he had local interest, some comments came from as far away as New York, Colorado and Washington.

Many of the positive comments Ost has received have been on his portrayal of the characters and the story.

Ost originally started writing “Tumbleweeds Burning,” his first book, because of his own family’s background and a former college roommate. He moved to Albert Lea in 1971.

Looking to the future, Ost said he’s not sure about a third book in the series.

“There could be, but I rather doubt,” he said.

There will be book signings and events in the future, but Ost said nothing has been coordinated yet.