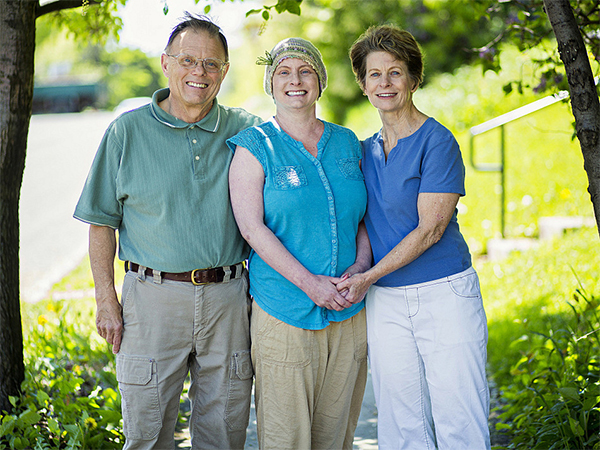 Kathleen and Rick Blake lost their 8-year-old son Michael to leukemia in 1988, four years after his diagnosis.

Last year, their family was again struck by cancer when doctors diagnosed their daughter Jessica with glioblastoma multiforme, a brain tumor.

Determined to help Jessica, the Blakes want her to start taking medical cannabis in July, when qualified patients will be able to legally use marijuana for the first time. “We’re looking for hope, because conventional medicine has not given us any,” Rick Blake said.

But even though medical marijuana use is now legal in Minnesota and the state Department of Health has started registering the thousands of patients who will be eligible to use it, doctors are wary of signing up patients.

Having seen what has happened to their daughter, the Blakes are determined to try.

Before being struck by cancer, Jessica Blake, 39, was a middle school social studies teacher in Esko, south of Duluth. She has had radiation and chemotherapy and now has short-term memory loss. She struggles to speak on the phone.

Her mom retired from her job in Grand Rapids to care for her. Both parents have moved into her Duluth home.

Kathleen Blake said studies show marijuana holds promise for treating diseases like the one Jessica has. She concedes that her hope may be misplaced, as the research only was done on mice. But she and her husband are determined to see if medical marijuana will help.

“There has been some research on mice that shows shrinking of glioblastomas and actually completely eradicating their tumor,” she said.

But Jessica Blake’s doctors at Essentia Health in Duluth have told the family that they aren’t ready to put her on the state medical cannabis registry. The Blakes said doctors at the University of Minnesota and Mayo Clinic also have turned them down.

Across Minnesota, other families have received similar responses from doctors.

As the state opens the door to medical marijuana use in pill or oil form, people suffering from nine different conditions set in law are seeking access to the drug. But few have received it.

Marijuana remains illegal under federal law. Providers fear they could still be banned by Medicare if they become involved with marijuana in any meaningful way.

Doctors also are wary of how it might interact with finely tuned clinical trials and treatments.

Dr. Brian Konowalchuk, chief of neuroscience for Essentia Health, said he and his fellow providers understand patient interest. But although lawmakers passed the medical cannabis law a year ago, Konowalchuk said its approval for medical use is so new that Essentia is still grappling with what to do.

“We have a tremendous amount of resources dedicated to this issue, and we are working very diligently to do the right thing for our patients,” said Konowalchuk, who cannot discuss individual cases.

While that deliberation is underway, Kathleen Blake fears an opportunity, now so close, is slipping away.

“Given the fact that conventional medicine has no hope to offer us, obviously, we want to try what we can.”

Some patients with incurable disease are struggling to improve their quality of life in the time they have left.

Among them is Bill Ward of Ham Lake, who was diagnosed last fall with pancreatic cancer.

Ward and his wife Kim own a half dozen Subway sandwich shops. Their oldest child is getting married in October. When they said cancer wasn’t in their plans, a doctor responded with advice that startled them.

“He just said, (and) this is when it got real … ‘What you should do is plan a simple wedding early just to make sure you’re here for it,’” Ward recalled. “He just said, ‘You should move it up, sooner.’”

That’s how much time Ward has left. At 55, he’s in his second round of chemotherapy at the Masonic Cancer Center at the University of Minnesota.

But he said doctors don’t aim for a cure.

Ward said some days are better than others. The days that he can eat are usually the better ones, but they’re hard to come by.

“If I could choose to not eat all day, I would probably choose that,” he said. “That’s been a huge problem for me.”

Ward, who has lost 40 pounds, said he’s increasingly hearing people talk about medical marijuana, some of it meant specifically for people with pancreatic cancer who suffer from cachexia, the physical wasting and malnutrition associated with chronic diseases. He’s had casual conversations about marijuana with nurses and others.

“But when I mention it, it’s like, ‘Oh, they have drugs that are way better than that. It’s like the good stuff,’” he said. “But here, I am, two or three months into it and nobody’s given me anything for it yet, either. Where is the good stuff?”

Like the Blakes, Ward thinks medical cannabis is an obvious alternative to conventional drugs. He hopes to simply get on the registry under the terminal-illness provision when he speaks to his doctor next week.

Others, however, have wider reservations about the process the state set up to supply medical cannabis to eligible patients. They question how and if it will work.

Cassie Traun is a 25-year-old information technology worker who suffers from Crohn’s disease — another eligible condition. She spoke to her doctor about the registry on Tuesday.

“He wants to certify me; he’s wanted to get me legal for years,” Traun said. “It’s just a matter of whether Health Partners is going to be okay with it or not. He has to follow the rules of the health group, unfortunately.”

A Health Partners spokesman said this week that the organization is still weighing its options. Other providers, including Allina Health and Mayo Clinic, also aren’t saying much about marijuana.

Beyond getting on the list, Traun has other concerns. They include prices of up to $500 a month per patient charged by the state’s two medical marijuana manufacturers. That isn’t covered by health insurance.

Traun said she’d also like more assurance from the state that its Internet-based registry is secure. She’s uncomfortable about turning over her medical records to the Minnesota Department of Health as law requires.

“I’m sure that (the department) is not trying to leak them out to anyone,” she said. “I wouldn’t think that they’re trying to do that. But it’s just one of those things that we really do need to think about, when you’re asking for really personal information like that. I don’t like random people knowing all my business about my health.”

Manny Munson-Regala, an assistant state health commissioner, said patient data is important because the medical cannabis program is based on the premise that the drug is medicine. That is based on evidence, he said.

Research data on patients was a key argument for reassuring doubters in the first place, he said.

Munson-Regala also said state officials have been telling health care providers for a long time that the program was coming, but some are just starting to react.

“At some level, I guess it’s not surprising that that’s occurring,” he said. “You know, for a lot of docs and a lot of providers, it became, ‘Oh, the clock just ticked. I need to start thinking about this.’”

Some patients said providers simply need to follow the law.

Sarah Wellington, a patient representative on the state’s Task Force on Medical Cannabis Therapeutic Research, suffers from multiple sclerosis and wants to be on the registry. She said her symptoms would qualify her for the list, but this week her neurologist and primary care clinic denied her request to be placed on it.

Wellington, a middle school teacher from St. Paul, lobbied for legalizing marijuana at the Legislature last year. She said health care providers insisted on keeping marijuana at a safe distance in the law, but now can’t keep from meddling in it anyway.