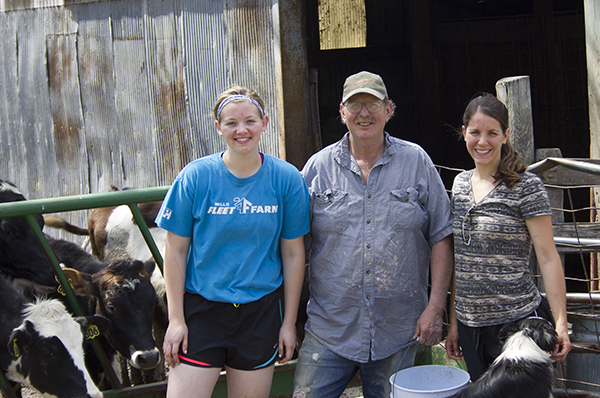 Rachel Wangen, Matt Wangen and Mary Wangen stand in front of some of their dairy cows at their farm in Twin Lakes. – Sam Wilmes/Albert Lea Tribune

Beginning as National Milk Month in 1937 as a way to promote drinking milk, National Dairy Month was initially created to stabilize the dairy demand when production was at a surplus.

It has since developed into an annual tradition that celebrates the dairy industry.

“The month brings a spotlight to what those in the dairy industry have to do to produce products,” Wangen said. “There are no off days. It’s not for everyone.”

Wangen, a board member with the Freeborn County Dairy Association, said the celebration during the month has evolved.

“In the past it was a bigger deal, almost a festival,” he said. At the time different towns had creameries. 4-H clubs would make floats. As the dairy industry has evolved and gotten bigger, the month has changed. It isn’t what it used to be.”

Earlier this month he worked on his farm with his two daughters, Mary and Rachel.

On vacation and home from graduate school at the University of North Carolina at Chapel Hill, Mary Wangen helped her father bale hay during her visit. Rachel is in high school.

“The farm will stay in them,” Matt Wangen said of his children. “When you grow up on a farm, it will always be with you. It doesn’t let you quit. It’s a lifestyle. Nothing is handed to you.”

Matt Wangen has farmed for 35 years. His operation is about seven miles south of Albert Lea.

Growing up on a  farm was a nice compliment to a life filled with travel, said Mary Wangen, 24.

“I’ve lived around the world,” Mary Wangen said. “Growing up on a farm has completed my experience. To get to play outside all the time was great. We learned where our food comes from and the life cycles of animals at an early age.”

Matt Wangen milks 40 cattle. There are 40 more young stock that will be ready to be milked in about two years, he said. He hopes his son Joshua, who helps his father farm, will take over the farm when he retires.

Matt Wangen has one other daughter, Elizabeth.