New pastor brings a love of music to church 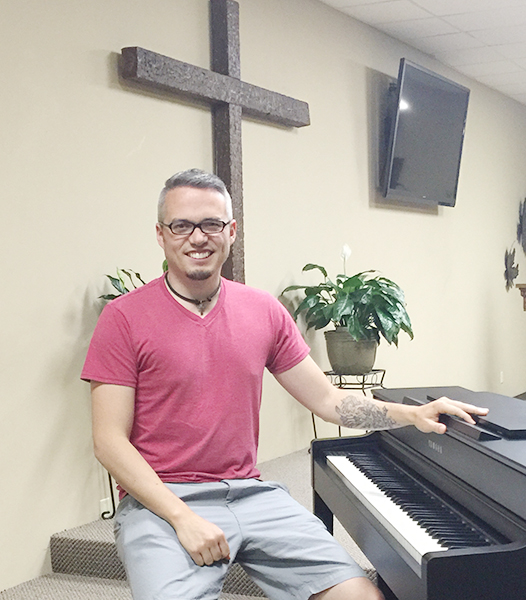 Nick Roen sits on the piano bench at Sojuners Church in Albert Lea. The piano is one of the four instruments Roen can play. – Madeline Funk/ Albert Lea Tribune

Roen is the new worship pastor at Sojourners Church.

Roen was born Jan. 4, 1984, in Freeport, Illinois, to Faye and Scott Roen. He lived there until he was 2 and then his family moved to Detroit. When he was 11 Roen moved to La Crosse, Wisconsin, where he stayed for middle school, high school and college.

The family moved quite a few times  due to Scott Roen’s job as a pastor.

Nick Roen graduated from the University of Wisconsin-La Crosse with a bachelor’s degree in music theory. After college he went to work as a program director at Arrowood Bible Camp in New Auburn, Wisconsin, for four years.

“Ever since high school I felt called to do full-time ministry,” Nick Roen said.

In 2011 Roen felt like it was his time. He started attending Bethlehem Seminary in Minneapolis, and he was there for four years to get his master’s degree. In May, he graduated and got a job at Sojourners Church in Albert Lea.

“I always knew I wanted my ministry to be related to music, that’s why I majored in music in college,” Roen said.

Dave Zuleger, another pastor at the church, said he knew Roen from his time at seminary. Over Roen’s last year, Zuleger was asking him to come help down at his church in Albert Lea.

“Wherever the Lord wanted me to be I was willing to go,” Roen said.

Whenever Roen’s not working or reading the Bible, he likes to be outdoors either fishing, canoeing, camping or waterskiing.

During his time at seminary Roen learned how to study the Bible in depth.

“We tried to understand what the original authors meant and how to apply it to our lives today,” he said.

Although Roen has only lived in Albert Lea for a month, he has loved every minute so far.

“My main passion is to help the people of God sing and worship well,” Roen said. “I also want to help the worshipers worship with their hearts.”