The NRHEG clay target team produced a state qualifier and put together the strongest performance of any team in its conference last week, but it wasn’t enough to catch McGregor-Aitkin-Cromwell, the team at the top of the conference standings, according to a press release.

NRHEG finished second out of seven teams in Class 4A Conference 4.

Frank Altrichter ended the season tied for the top individual spot in the conference with a 23.1-of-25 average per round. Altrichter is in the top 100 in the state, and he will end his high school clay target career by competing June 20th at the Minnesota High School League-sanctioned individual state tournament. 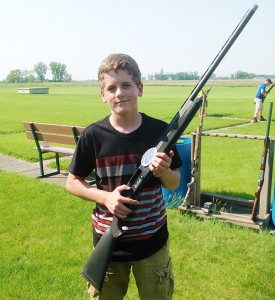 “I am very excited for Frank, “ Sorum said. “He was on the team our first year and was named most improved shooter. It’s great to see him on top of the game his final year.”

NRHEG freshman Brett Kubiatowicz recorded a perfect 50-of-50 round. He was joined by nine other shooters who shot rounds that ranked in the top 10 for the week.

NRHEG coach Dan Sorum said 42 of the team’s 51 shooters scored above their personal average, and half of them scored above 40 out of 50.

“This was a phenomenal effort on the team’s part,” he said. “But, we needed McGregor-Aitkin-Cromwell to stumble bit as well, and they proved to be the tough team they have been all year.”

Having seven shooters in the top 10 averages in the conference bodes very well for the team as it heads to the state championship on June 14 in Alexandria. At this statewide invitational, the top five scores from all of the shooters on a team count toward the team’s attempt to qualify for the second MSHSL-sanctioned team state tournament. Four teams from Class 4A will qualify.

This week the team will get a break. NRHEG will host its annual picnic and fun shoot on Wednesday as the team will recognize individual accomplishments. Then it will be back to business, as 30 shooters prepare for Alexandria.