Funeral services for Nylene V. Wasmoen, 97, of Albert Lea will be at 1:30 p.m. Tuesday at Mansfield Lutheran Church. The Rev. Don Rose will officiate. Burial will be at Graceland Cemetery. Visitation will be from 5 to 7 p.m. Monday at Bayview/Freeborn Funeral Home and one hour prior to the services at the church. Online condolences are welcome at www.bayviewfuneral.com.

Nylene died on Saturday, May 30, 2015, at the Good Samaritan Society of Albert Lea. 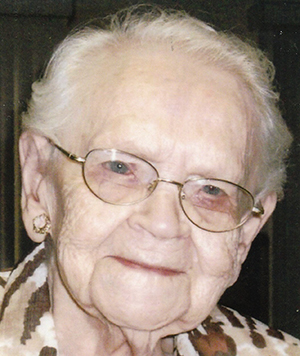 Nylene Valborg Wasmoen was born March 31, 1918, in Emmons, the daughter of Gust and Olga (Erickson) Hanson. She was baptized at the Emmons Lutheran Church and confirmed at First Lutheran Church. Nylene attended and graduated from Albert Lea High School.

On Oct. 26, 1937, she was united in marriage to George Wasmoen at the Little Brown Church. The couple farmed for many years. After the death of George, Nylene volunteered for the Naeve Hospital Auxiliary for 22 years ,of which she was very proud. Nylene also enjoyed traveling with her friends on many bus trips. She was a member of First Lutheran Church, Christian Solos and Twin Lakes Senior Citizen Center. Nylene enjoyed the years that she was a resident of Senior Court and the friendships made. She loved being involved with her grandchildren’s many different school and sporting events as well as watching the Twins, Vikings and Gophers.