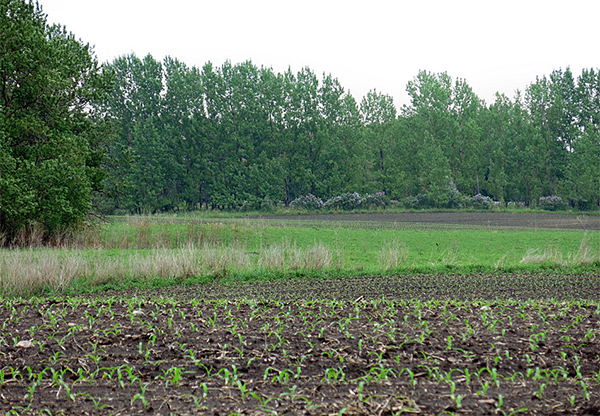 Farmer Fred Specht planted this low spot in his field to grass and wildflowers in 2011 on his farm near Mahnomen. Specht was concerned that the pollinator habitat would become a “weed patch,” but he said perennial flowers and grasses have choked out most noxious weeds. — Dan Gunderson/MPR News

MAHNOMEN — On the edge of a narrow gravel road near Mahnomen, Fred Specht jumped from his truck and pointed out the site where he planted a patch of prairie four years ago.

“As you can see, it’s kind of low through there,” Specht said, “So you were always waiting on that low spot, and occasionally getting stuck.”

Specht said farming that small, oddly shaped corner of the field was inefficient because it took time to maneuver large farm equipment into it.

So it made sense to turn the land into pollinator habitat. Various U.S. Department of Agriculture conservation programs pay farmers to plant a mix of perennial native flowers and grasses to help support the bee population.

Scientists are trying to understand what’s killing bees, and one factor might be poor nutrition. In response, there’s a big push to provide more food for bees and other insects.

Enter farmers, like Specht, who are willing to introduce flowering plants among their corn and soybean fields.

This year, Specht will plant prairie flowers and grasses in a second hard-to-farm corner of the field. These are small pieces of land, each about the size of the grass baseball surface at Target Field.

Dustin Jasken, a conservationist with the USDA, helped get Specht’s land into a pollinator program. With a wooded area and a wetland nearby, Jasken explained, these plots of native plants add a small but useful bit of habitat for bees, butterflies and birds.

“It’s a pretty diverse landscape, versus the surrounding areas that are predominantly ag,” he said. “It’s not a real large area, but it’s a nice little niche area for wildlife. You can hear all sorts of songbirds doing their thing this morning. I wouldn’t doubt if you went a mile west of here you wouldn’t hear much of anything.”

Jasken said this land is enrolled in the pollinator program for about 10 years, but Specht said he’ll probably keep the land in native plants longer than that if there’s a financial incentive.

Specht said he was dubious at first about the idea of a patch of prairie amid his corn and beans:

“When I first planted it, I had gone in to Dusty and I said, ‘Jeez, you know, it’s nothing but weeds in there.’ He said, ‘You have to be patient. The first couple of months are going to look rough. Just look the other way when you drive down the road.’ Once these long-term perennial species took over they choked everything else out.”

Now Specht enjoys driving by the site during the summer to see what prairie flowers are blooming.

Jasken said small plots of pollinator habitat are pretty typical under the farm programs. In a perfect world, he said, he’d like to see larger blocks of habitat on the landscape.

“Where you might have a little bitty piece in the middle of a thousand acres, I mean that’s going to have a lot less bang for your buck than larger blocks where there’s kind of a checkerboarded effect throughout the landscape,” he said. “But beggars can’t be choosers and if someone says we want to put it here, we’re not going to bicker over it and say, ‘No, I really think you should put it over here.’”

According to USDA officials, there are currently 72 pollinator habitat contracts in 33 counties, resulting in 750 acres of Minnesota land planted with native flowering species. That’s just over a square mile of land. Fifty-five applications are waiting for funding to become available. The average cost is about $560 per acre.

Experts said the impact of small pieces of habitat scattered across the landscape is still unclear.

A few miles away from Specht’s land is a project on the other end of the spectrum.

A 306-acre piece of land — that’s about half a square mile — will become native prairie and pollinator habitat owned by the Longspur Prairie fund, paid for with state and federal money.

Peter Schultz is the only employee of the Moorhead nonprofit. He used a mix of federal and state programs to create an incentive for the landowner and pay for restoring the native prairie.

Schultz sees financial incentives as the key to habitat restoration.

“I want to get as much land into protection as we can,” he said. “But at the end of the day, that means talking to farmers like professional businessmen. I can’t just ask a gentleman to give me land. If I really value that partnership, I’ve got to be willing to offer something.”

He plans to use this land as a research lab, where scientists can study what kind of plants contribute most to the health of bees.

Scientists in Minnesota and elsewhere are studying the eating habits of bees to better understand how big the plots of habitat need to be and what mix of plants provides the healthiest food for pollinating insects.

“We want to know that we are getting the most bang for our buck,” Schultz said. “And right now, you know, that’s still subject to debate.”