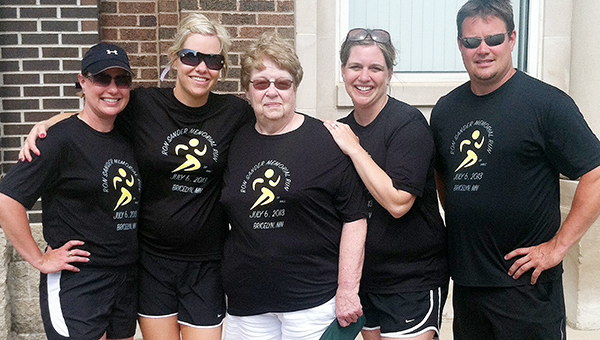 The legacy of a Bricelyn resident lives on through a series of races on the Fourth of July.

Event organizer and daughter of Sander, Kristin Bullerman, said Sander had five children and made time to attend their games.

“All of us kids played sports, and he never missed an event,” she said. “It’s a great way to honor him and support the community that he was very active in.”

Four years ago, the race was the Bricelyn Chicken Run, but the name was changed to honor Sander, who lived from Sept. 15, 1940, to July 6, 2012. Sander was a bank examiner for the state of Minnesota and moved with his family in 1975 to Bricelyn, where he was president of State Bank of Bricelyn.

Bullerman said proceeds from the event will go to the Bricelyn Community Club, a group that funds projects for the city. Last year, funds went toward improvements at the town’s swimming pool. The community club also put a new roof on the picnic shelter at the city park, Bullerman said.

Registration for all three races will be in front of Farmers Trust & Savings Bank at 8 a.m. Saturday at 219 N. Main St. in Bricelyn.

Bullerman said the course will be flat and run on asphalt.

Although the 5K won’t be chip-timed, Bullerman said runners will be timed manually.

After the races, water, bananas and granola bars will be available.