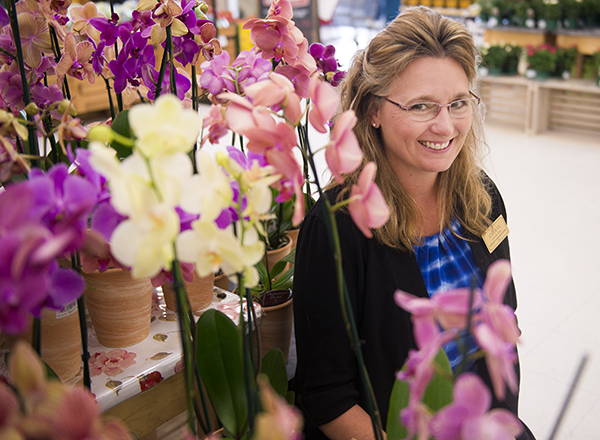 The award is called the Merchandising Award of Excellence, or the Grand Award, and is sponsored by Super Floral Magazine of Topeka, Kansas, and Börgen Systems of Des Moines, Iowa.

Cheryl Overland was presented her own engraved Orrefors crystal Börgens Cup on June 9 at the International Floriculture Expo in Chicago. Her winnings included a pre-paid trip in Chicago and a future spread of Overland’s winning display in Super Floral’s August 2015 issue. She will also be recognized for her achievements with a spread in the Produce News, another national magazine.

The winners were handpicked after professionals judged on color harmony, cross-merchandising, signage, theme development and use of stand-alone display in their floral displays. Before the hundreds of participants could enter into the contest, they had to meet requirements such as being a supermarket employee and being within Canada or the United States. The award is earned by having excellence in floral arrangements, and it recognizes the nation’s best supermarket florists.

“I attribute this award to a great team and teamwork,” Overland said. “They (the judges) look for very creative ideas. We caught their eye with our county fair theme. Everyone uses romance and roses, but our fair emblems were what made it.”

Since 1998, Super Floral magazine has been a monthly newsletter with around 13,000 print subscribers every month. Along with its neighboring sponsor, Börgen’s Systems, Super Floral is a well-rounded and respected company. Börgen’s Systems specializes in floral casing and deli and bakery and deli and bakery cases. The company brings new technology and designs to the market while using high-quality material.

Overland was the first Minnesota-based florist to win the Grand Award from these two sponsors.

“Hy-Vee is a great company,” Overland said. “Without them, we couldn’t be as creative. They don’t give us a floor plan, and they let us be our own people. They are behind us 100 percent.”

Overland has led HyVee’s floral department to two other awards: the Cross-merchandising Award in 2012 and the Signage Award in 2014.

“My goal for the future is to win all five awards,” Overland said. “We’ll have to try new displays and ideas for next year. We have good clientele that push us and are excited for our new displays.”