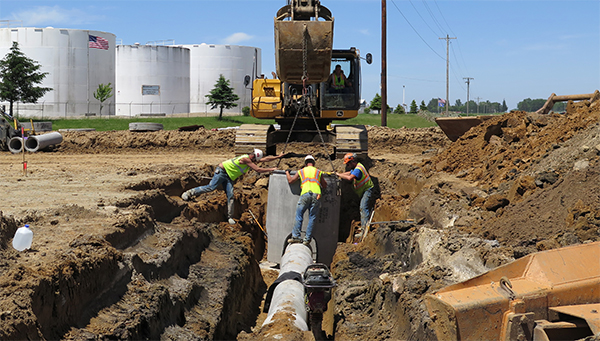 Workers lower a sewage pipe into the ground near the intersection of highways 14 and 42, just outside the southeastern Minnesota town of Eyota on June 9. It’s the site of the state’s newest roundabout. — Elizabeth Baier/MPR News

EYOTA — Jan Jech has been coming to a place not far from where her husband spent his final moments for some time.

But until June 9, she couldn’t bring herself to look at the intersection of state highways 14 and 42, where Marvin Jech died two years ago. He was on the way to a bakery to pick up a cake to celebrate their 45th wedding anniversary when another car drove through a stop sign and hit his car.

The crash changed Jan Jech’s life forever. She’s returned to the area a handful of times in the last month to see how work is coming on a project that could prevent others from dying there.

Workers are building a roundabout at the intersection, the latest in a series of roundabouts constructed since state transportation officials built the first one 15 years ago in Medford. Studies show the circular intersections reduce serious accidents, improve commute time, curb pollution and cut gas usage.

As an excavator dug a hole at the intersection outside Eyota, Jech described the scene as overwhelming.

“Just to see how it’s all progressed from two years ago — total heartache — to this coming along, it’s just amazing,” Jech said. “I know my husband’s in heaven smiling down saying, ‘good going,’ for everybody.”

Jech said she visited the construction site to honor her husband and support the work the crew is doing to improve highway safety. She usually leaves cookies at a nearby project office, but on her latest visit decided to see the work up close.

According to Minnesota Department of Transportation records, there were 40 crashes at the intersection from 2002 to 2013, including 16 with injuries. The one fatal accident claimed Marvin Jech’s life. That prompted transportation officials to choose the site for a roundabout.

Installing a roundabout can cost up to $3 million, compared to a regular intersection that may cost $200,000. Roundabouts also work best where roads with equal volumes of traffic meet.

But repeated studies have shown that roundabouts reduce both the number and severity of crashes, said Nancy Klema, a MnDOT traffic operations engineer in southeast Minnesota.

It all comes down to one factor: speed.

“Roundabouts are designed with curvature as you enter and that’s done on purpose to slow you down,” Klema said. “You obviously can’t drive as fast if you’re forced to curve not only around the island but also in the approach.

“When people are driving at lower speeds, crashes have lower severity.”

In December, MnDOT released its first comprehensive traffic safety study on roundabouts in Minnesota. It compared crash data for 24 locations before and after the roundabouts went in. Overall, crashes dropped 30 percent. Crashes involving injuries dropped by 65 percent and the most severe crashes dropped 82 percent.

There are about 140 roundabouts on state, county and local roads and another 40 either in the design or construction phases.

On a rural road like Highway 14, the speed limit is 55 miles per hour. Klema said the roundabout will cut drivers’ speed at the intersection at least in half.

“In a community like Eyota, the traffic just goes zipping by,” Klema said. “This is going to force the traffic to slow down.”

Another benefit of roundabouts: they keep traffic moving.

Despite the benefits of roundabouts, they come with a learning curve for drivers, who often have resisted the idea of a new roundabout, Leuer said.

“For a lot of drivers, it was just something they’ve never encountered. It was something they were never taught in drivers’ education,” Leuer said. “So probably the first time they ever had to deal with a roundabout was when they were approaching one. And to see something you’ve never seen before and have to navigate it … can be very intimidating.”