Memorial services for Sharon (Bauers) Bates, 69, of LeHigh, Iowa, will be at 11 a.m. Monday at Lunder Lutheran Church in Albert Lea. The Rev. Bill Peters will officiate. Interment will be in Lunder Cemetery. Visitation will be one hour prior to the service at the church. Online condolences are welcome at www.bayviewfuneral.com. 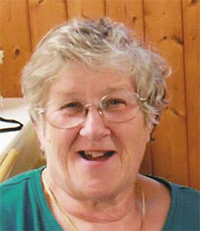 Sharon was born Sept. 21, 1945, to William and Irene (Schreiber) Bauers. She grew up in the Albert Lea area and graduated from Albert Lea High School. She married Paul Isaacson on July 14, 1966. They had two children, Angie and Jason. They were later divorced. She then married Henry Bates on Oct. 24, 1981. They had three children, Patrick, Amber and Crystal.

She was a member of Immanuel Lutheran Church in Burnside, Iowa. She was involved in the quilters club and various Bible studies. She enjoyed coffee and playing cards with her friends. She loved spending time with her family, cooking for everyone and helping anyone in need.